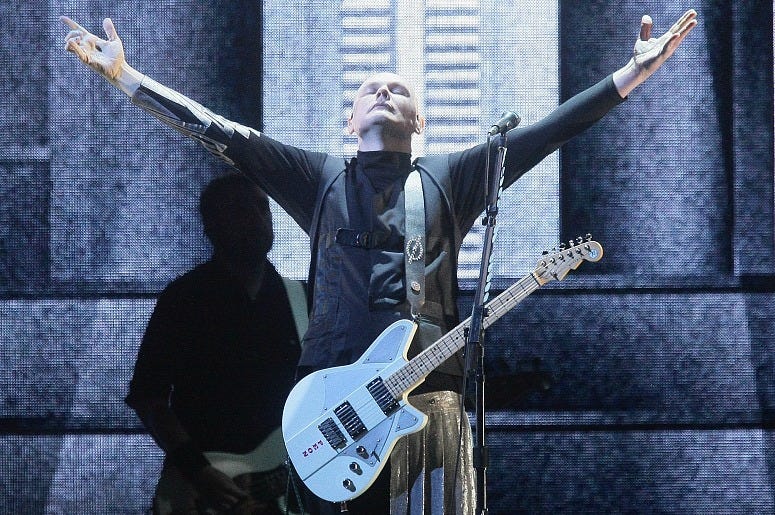 The 30th Anniversary tour continues for The Smashing Pumpkins, as they made their way to Tulsa, OK on Sunday night. So far these shows with Billy Corgan, James Iha, and Jimmy Chamberlin have been packed with surprises like Courtney Love and Mark McGrath stopping by, as well as some deep cut classics and interesting covers.

The Tulsa stop has a little of all of that for Corgan and company, as the band invited up their unlikely friends in Hanson to be a part of their cover of Fleetwood Mac's "Landslide."

"You saw these kids busking on the corner?" Billy joking asked guitarist James Iha on stage. "You said hey kids, come on and play this Fleetwood Mac classic with us tonight."

At that point, Tulsa's own Hanson came to the stage for a sweet stripped-down take on the song, gathered around the mic at the front of the stage as Billy and Iha strummed along in the background. You can watch fan-shot footage of the moment below.

That sounds like an odd music Mad Libs moment, but in actuality the scene makes total sense. "Landslide" has been a staple of Smashing Pumpkins shows since it first appeared as a "Disarm" b-side back in 1994, so that one is easy. As for Hanson, not only are they essentially the collective mayors of Tulsa, but Taylor Hanson was also a part of the supergroup Tinted Windows with James Iha,  Adam Schlesinger of Fountains of Wayne and Bun E. Carlos of Cheap Trick. The band put out an album in 2009.