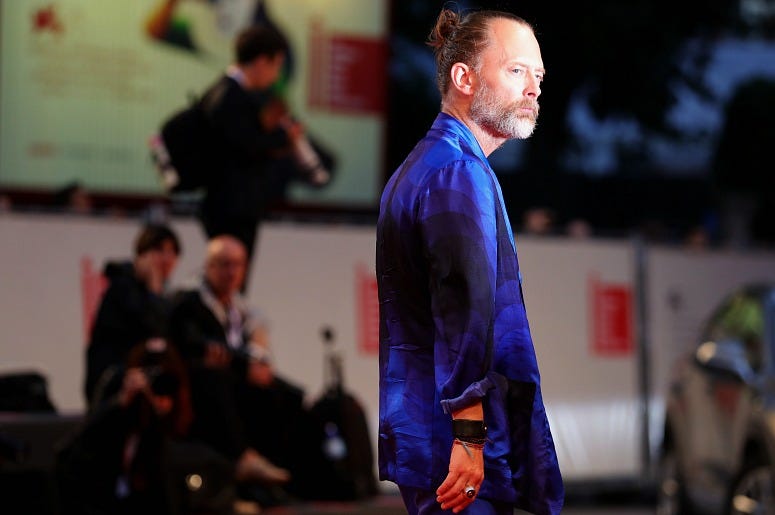 Thom Yorke is busy keeping up with the Greenwoods.

The Radiohead singer sat down with BBC Radio 1 and discussed his motivations for his first film score, the haunting and atmospheric Suspiria. Yorke admits that after watching the success of bandmate Jonny Greenwood, his jealousy became a motivation to try it himself. Greenwood has composed several scores, especially for director Paul Thomas Anderson, and was nominated for an Academy Award for his work on Phantom Thread.

“If I was honest with myself, I was a little bit jealous but felt that I couldn’t so I never tried" Yorke tells host Phil Taggart. "“Jonny’s just so far ahead. He understands orchestration works, he can read music, he’s studied it all. I mean, he sits there studying scores. For Paul Thomas Anderson’s last film, he went away and read all the scores from the period of the composers of the time. That is not gonna happen with me cause I can’t read music.”

“So he’s out there off on his travels and he knows what he’s doing, whereas I’m totally scratching the surface, purely amateur. It stayed like that for a while and then I suddenly found myself committing to do a horror film and then thinking, ‘Well, it’s a horror film, I can just make loads of weird noises. It’ll be fun.’ There was way more to it than that and it was more melodic than that and more adventurous, and I was having to write choral pieces just using my own voice and many, many different things. So I’m a sucker.”

The result has been something special, as Yorke has won critical acclaim for his work on Suspiria.

It remains to be seen how this work will impact his upcoming solo album. As he has made the rounds discussing the score, he has also spoke about his album that will be coming next year. “It’s very electronic, but it’s different from what I’ve done until now" he told Spanish newspaper El Mundo last month. "The method has been the opposite of depending upon the computer. It’s a strange process in which we construct a song in the studio, break it apart, we reconstruct it with a live mix and it turns out completely differently, and that’s when we record. We have improvised many sounds and effects. It has been a very strange way of making a record, which is very exciting.”

During his conversation with BBC Radio 1, Yorke did offer up some piano-only performances. One of them being the 2000 Kid A classic "Everything In Its Right Place."

Thom Yorke heads out on a solo tour later this month. You can find the full list of dates here.