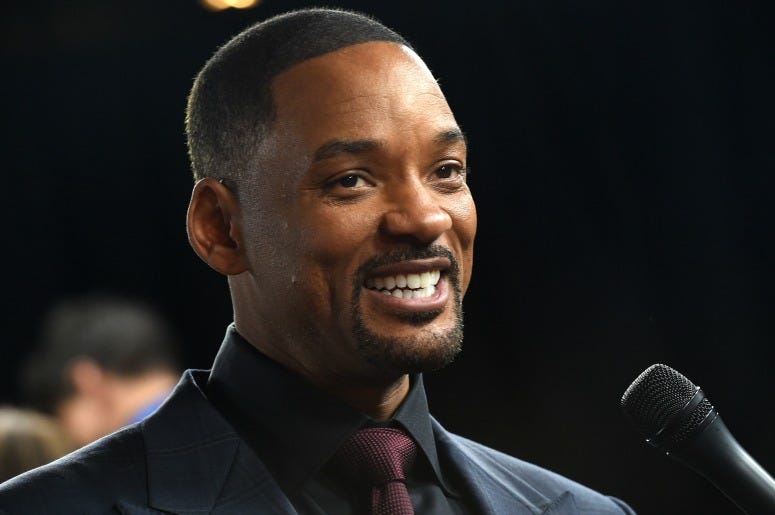 The first photos of the Aladdin cast have been revealed by Entertainment Weekly in all their shining, shimmering, splendor. The live action retelling of the Disney classic is directed by Guy Ritchie and is due in theaters on May 24, 2019.

Aladdin and Jasmine look great, Abu is still adorable, even Jafar is serving looks. Most importantly though, this is our first chance to see Will Smith as “the ever impressive, the long contained, often imitated but never duplicated Genie of the lamp!”

BAM!! First look at the Genie 🧞‍♂️, Princess Jasmine, and #Aladdin! Check Me Rockin’ the Top Knot Ponytail Vibes in @entertainmentweekly 😆 (and yes, I’m gonna be BLUE! :-) This is how the Genie is in Human / Disguise Form. My character will be CGI most of the movie.)

Smith is rocking the top knot ponytail and banded beard, but he looks less blue than expected. The Fresh Prince star clears it up in the comments, explaining that what you're seeing is the Genie in "human / disguise form", and that the actual Genie you see in most of the film will be CGI. The final version of the Genie in "floating form" isn't quite done yet.

The role was originated by the legendary Robin Williams, which Smith explains he has found a way to make his own. “I started to feel confident that I could deliver something that was an homage to Robin Williams but was musically different,” he tells EW. “Just the flavor of the character would be different enough and unique enough that it would be in a different lane, versus trying to compete.”

“I think it’ll stand out as unique even in the Disney world. There hasn’t been a lot of that hip hop flavor in Disney history.”