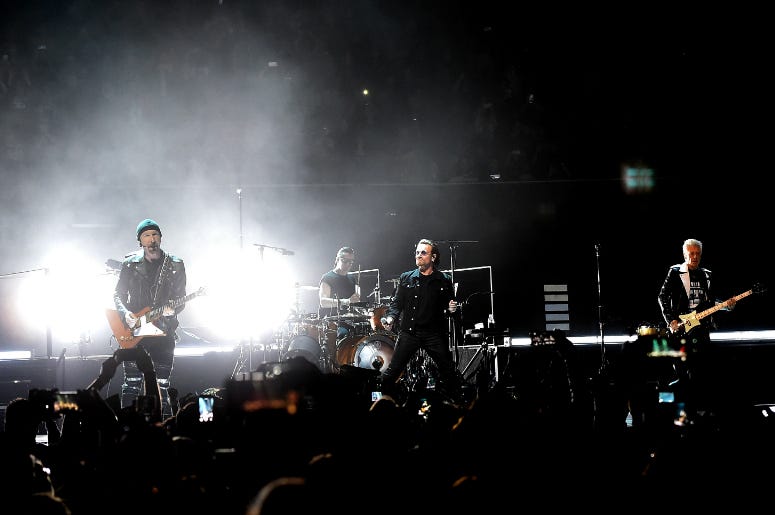 For a band that has 43 GRAMMY nominations and 22 GRAMMY wins, we should've realized that asking U2 for just one favorite GRAMMY moment would be nearly impossible.

Not only was this a walk down memory lane for music icons Bono and The Edge, but a pretty fascinating to learn which moments they cherished most:

From a performance perspective, this was an easy one for The Edge -- "It was the performance that Bono and I shared with Kendrick Lamar at the last Grammys – that was an amazing moment and such an honor.” While that was an epic moment, Bono immediately recalled their performance of "Get Out of Your Own Way" that same GRAMMYs. It’s hard to forget the renowned performance that took place on a barge right in front of The Statue of Liberty. It may have been freezing, but it was certainly a moment that will go down in both U2 and GRAMMY history.

Oh, and just in case you didn’t take in the magnitude of what it actually means to win 22 GRAMMYs yet, we should all pause and give the guys a little applause for this one…

"Can I have another Grammy moment?" asks Bono as he humbly drops their monumental win for album of the year with The Joshua Tree beating out the King of Pop himself, Michael Jackson. "Just sayin'…" he adds grinning from ear-to-ear. We agree Bono, that is totally a well-deserved pat on the back – kudos!

Let’s not forget their back-to-back wins two years in a row for Song of The Year, both from the same album – "Beautiful Day" followed by "Walk On" – "that was a very special feeling" admits Bono.

Just when it seemed as though these guys could go on forever, we learned about the time Adam nearly missed accepting their award for The Joshua Tree as he went to the bathroom at the crucial moment.

While the guys couldn’t exactly pin-point their all-time favorite GRAMMY moment, one thing we know for certain is that U2 are one of the greatest bands of all time. See for yourself in this exclusive performance of "Love Is Bigger Than Anything In Its Way" from Songs of Experience from the Radio.com beach house:

Check back for another U2 exclusive tomorrow!