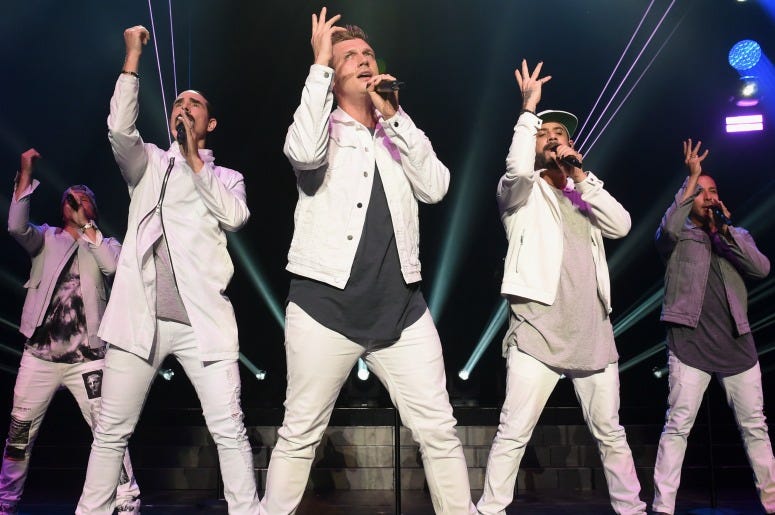 This week everyone's favorite band to be back, is back stronger than ever. Plus we get an electronic rock exploration of love, a brawny and bluesy does of gritty guitars, and an uplifting collection from a well-travel musician. These are the highlights from this week's New Music Friday.

There is something decidedly different about the Backstreet Boys on DNA. The hallmarks are all still there. The effortless harmonies blended to perfection and the playful sexuality, even the wounded love lyrics flow like they did two decades ago. But over all of it is a fresh coat of maturity and well-earned experience that radiates for the group that has been together for 25 years strong. The Boys are mostly now firmly in their forties, and the youthful smirk of their first successes has completely transformed into confident conviction. DNA is grown man music from five gentlemen who have once again found their groove. While the entire album feels like a giant sonic step forward, there are a few examples that stand out to show their growth on DNA. On "Passionate" the Boys ride a rubber bassline and coalesce in the chorus with precision. The song is dotted with horns and vocal runs, fluctuating from tight, perfect pop to an open space for their voices to explore. Elsewhere the group shows off in synchronized style on "Chateau" with a timeless track, and croon through "The Way It Was" in a masterful moment from another era. As they have boiled things down to basics, the Backstreet Boys sound bigger and more emotive than ever. - Michael Cerio

Bring Me The Horizon - amo

“Cause a kid on the ‘gram in a Black Dahlia tank says it ain’t heavy metal,” sings Oli Sykes in a self-aware moment anticipating the backlash they’ll receive for making such a huge shift. Bring Me The Horizon is fearlessly experimental on their sixth studio album amo. The new release is a sonically huge work that continues on their fast track out of metalcore and into a genreless microcosm they’re creating all on their own. Oli is simultaneously vicious and in love on the EDM-heavy album with tracks like the Grimes-assisted “nihilist blues.” The inclusion of adventurous interludes and intros in between songs that tread through rock, pop, and dance secures their spot as pioneers who are deciding the future of the genre. Managing to successfully make a shift to an electronic-leaning sound while still being authentic and incredibly unique, amo is the band’s next step to becoming rock juggernauts. - Tiana Timmerberg

Retro, blues-based rock is making a comeback and Rival Sons do it as well as anyone. The Southern California band is a decade old now, and they’ve really pulled it all together on their sixth studio album, Feral Roots. Rival Sons come storming out of the gate on the lead track, “Do Your Worst.” Jay Buchanan’s powerful Paul Rodgers-esque vocals soar above a thundering groove and dirty guitar. “Look Away” channels the second half of Led Zeppelin III before turning into something completely different. And “Stood By Me” keeps the momentum going with its “Mustang Sally” bar band feel. On Feral Roots, Rival Sons take the best of classic rock and make it their own. - Bob Diehl

Michael Franti & Spearhead have made a career out of music the exudes vibes of positivity and presence. His latest album is no different and just furthers the band’s mission to spread love and beauty. Stay Human Vol. II is the sequel to 2001’s Stay Human and the follow-up to 2016’s SoulRocker. The album is joyful mix of love songs – to his family, fans, and humanity – played out over a reggae-soaked pop beat mixed with dashes of beachy hip-hop and conscious rap. And with divisiveness seemingly around every corner these days, it’s tracks like “The Flower” and the aptly named “This World is so F***ed up (But I Ain’t Ever Giving up on it)” that the world needs to hear right now. - Kyle McCann

Also out this week is new music from FIDLAR, Mike Krol, and The Dandy Warhols.