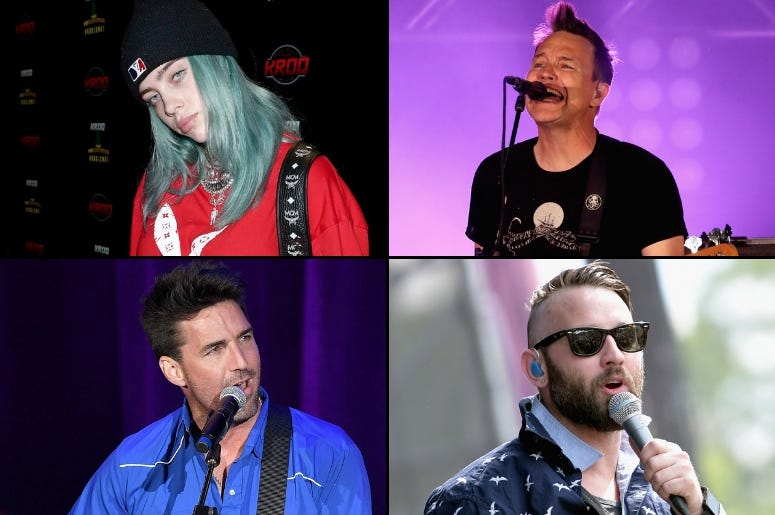 This week we get a big debut from a new kind of pop star and a pop punk dream collaboration. Plus there's a Country music party starter and an uplifting collection of sing-along anthems. These are the highlights from this week's New Music Friday.

Billie Eilish - WHEN WE ALL FALL ALL FALL ASLEEP, WHERE DO WE GO?

WHEN WE ALL FALL ASLEEP, WHERE DO WE GO? is Billie Eilish's official debut. It arrives with impressively high expectations for a 17-year-old singer, but they are well earned after early examples from the "you should see me in a crown" star. Each new look into Billie's world has offered something achingly authentic and uniquely her own, and that experience is maximized as an album. Often dark without being aggressive, her spooky soundscapes still manage to find their pleasing center. In other places Eilish is sparse and effective, opening herself like a diary, spilling secrets and emotions in a haunting and touching way. The fact that it all feels so true is likely why Eilish has resonated so quickly. A lot of her debut lives on the low end. Rattling bass and confessional whispers take listeners by the hand into this uneasy dream. Sometimes it's a restrained trash like a night terror, elsewhere it's with lulling softness coaxing you to follow her. It's all very rich but not decadent, thriving with emotion and terror near each turn. - Michael Cerio

When Blink-182’s Mark Hoppus and All Time Low’s Alex Gaskarth teamed up for a new side project, the alt world knew they were in for a serious treat. The two powerhouse frontmen have already built rock solid names for themselves, but were ready for a new way to express their creativity after dozens of releases with their respective bands. In comes Simple Creatures. The duo created through what could only be every scene kid’s fever dream sounds refreshed and confident on the six-song Strange Love EP. Their debut release comes packed with upbeat tracks that give a fresh spin to their recognizable sounds, highlighting their beloved vocals while incorporating driving guitar riffs, electronic fuzz, and catchy choruses. - Tiana Timmerberg

Jake Owen’s sixth studio album and first since 2016 is an escape to an amazing party place. Greetings From…Jake is the most fun the singer-songwriter has ever had, and the LP is built on poetic lyrics that roll off his tongue like he’s done this before. The tropical “Drink All Day,” featuring the amusing lyric “You can’t drink all day if you don’t start in the morning,” and “Senorita” featuring Lele Pons pay off the palm tree tease on the album cover that is also a nod to Bruce Springsteen’s Greetings from Asbury Park, N.J. “Grass is Always Greener” gets some help from Kid Rock, and the clever “I Was Jack (You Were Diane)” samples the classic John Mellencamp tune. One thing is for sure: Greetings From…Jake is an early candidate for soundtrack of the summer of ’19. - Bob Diehl

Rattlesnake, the latest album from Canadian indie-folk-rockers The Strumbellas, quite honestly, is hard to describe. On its own, it’s a sonically stunning follow-up to 2016’s Hope, with a similar sound that after a decade together is uniquely theirs. But when lined up with their other albums and listened to in chronological order, Rattlesnake is best described as the fourth chapter of a book on how a band can evolve without changing who they are at their core. With traces of country, dashes of folk, and a hearty mix of pop-rock, The Strumbellas have managed to change their narrative in 2019. Dark, brooding, and at times dubbed “emo,” their latest album is none of those things. The lead single and first track, “Salvation,” sets the stage for an album that diehard fans will still recognize. But the optimistic and upbeat vibe through all nine tracks is what will attract new fans. - Kyle McCann

Also out this week is new music from Ben Platt, O.A.R., and George Strait.