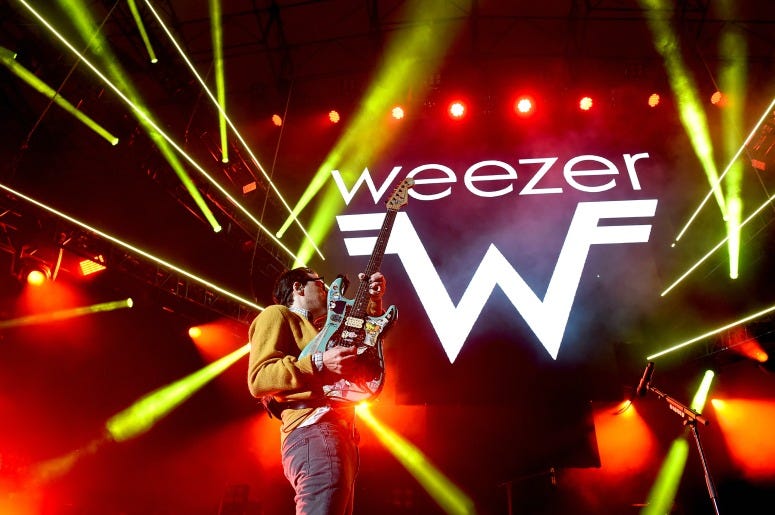 This week we have a long-awaited release from a group of iconic, off-center rockers. Plus we see the return of a trap legend and one of the biggest voices in Alternative. There's also a long-time hitmaker adding another chapter to his story. These are the highlights from this week's New Music Friday.

Weezer and Rivers Cuomo have returned to the lab to offer up another round of experiments with a strong pop sensibility. The Black Album arrives with a few new tricks that add to their legend. Cuomo wrote these songs at home on the piano for the first time, and sent them to album producer Dave Sitek of TV On The Radio and the other members of the band to explore and add their own spin. The result is an amazing array of stylistic diversity, dressing up Rivers' often stream of consciousness style songwriting with anything from muscled up mariachi on "Can't Knock The Hustle" to the almost sinister AM Gold dressing of "High As A Kite." Weezer goes bold and finds a lot of room to move on The Black Album, and it ends up being another exciting listen. The truth is no matter how many weird or wonderful ways the band attempts to put together an album, at their core they still can't stop writing great pop songs with a smile. - Michael Cerio

2 Chainz - Rap Or Go To The League

The fifth studio album from 2 Chainz is maybe his hottest yet, thanks in large part to the who’s-who lineup of heavy hitters he recruited for his Pretty Girls Like Trap Music follow-up. Kendrick Lamar steps in on “Momma I Hit A Lick,” Ty Dollar $ign guests on “Girl’s Best Friend,” Lil Wayne and E-40 get their feature on “2 Dollar Bill,” and towards the end of the album “I’m Not Crazy, Life Is” rolls out both Chance the Rapper and Kodak Black. That is a lot of fire power on Rap Or Go To The League. Of course, keeping with the theme of the album, NBA G.O.A.T. LeBron James actually A&R’d the release. But with all the stars involved in the project, it might turn out that his collab on “Rule The World” with reigning pop icon Ariana Grande will be the biggest banger in the whole set. - Kyle McCann

Hozier is back with the long-awaited follow-up to his 2014 smash, self-titled album. With the resounding love for hits like “Take Me To Church,” the Irish singer was left with high expectations and big shoes to fill. Hozier does more than enough to deliver on Wasteland, Baby!, a thought-provoking and sincere work that shows off his firm grasp on everything from jazz to folk. After kicking off this album release cycle with the rallying protest anthem “Nina Cried Power,” he continues to outline a limit-testing yet comforting and familiar sound. His earnest voice sings of love, injustice, and everything in between on the 14-track Wasteland, Baby!  - Tiana Timmerberg

The “Summer of ’69” was 35 years ago, but Bryan Adams is still feeling young on his 14th studio album and his first in four years. Shine a Light begins with two tracks that elbow their way into today’s pop scene, helped along by Jennifer Lopez on “That’s How Strong Our Love Is.” The album then takes a quick turn into Adams’ familiar bare bones, head-bobbing guitar rock - highlighted by “All or Nothing.” The album ends with a stripped-down acoustic guitar and harmonica version of “Whiskey in the Jar”, the oft-covered Irish folk song that Metallica once took a stab at. - Bob Diehl

​Also out this week is new music from Queensrÿche, Mark Morton, and Tom Walker.