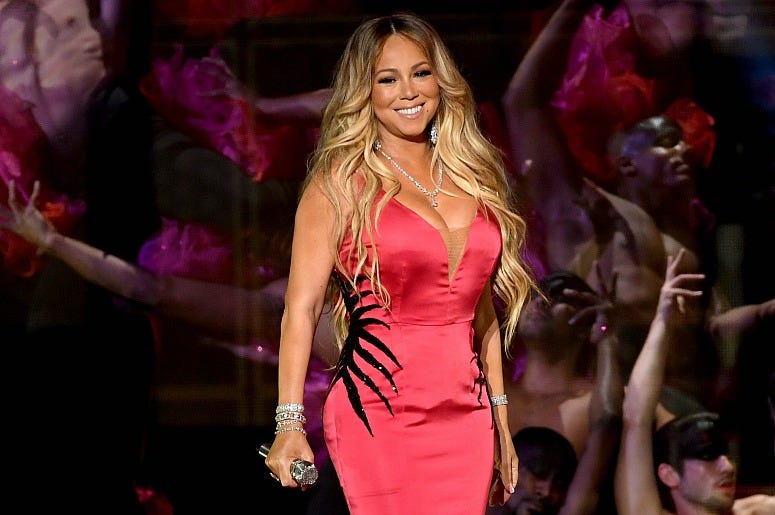 This week Mimi simmers with a smooth new collection, Mumford is back are ready to explore, and the Pumpkins reunite and return to form. Plus, Britan's best girl group delivers empowered bangers and Bublé lends a lot of love. These are the highlights from this week's New Music Friday.

It seems as though Mariah Carey has learned a lot in the past few years. On Caution, Mimi settles into a space custom-built for her voice, cooing sultry songs of love and heartbreak over late night trap beats and classic R&B melodies. Mariah has been many things, but this breathy, steamy sound suits her especially. As a nod to the era, Carey samples a Lil Kim jam on "A No No" and invites Slick Rick for a guest spot on "Giving Me Life." The singer's fifteenth studio album is a complete, solid entry into the icon's catalog. - Michael Cerio

Mumford & Sons are back with their long-awaited return, delivering Delta as their first new album in three years. The diverse, 14-track album spans all the way from hip-hop influences seen in synthy beats to remaining hints of their folk-leaning roots that captivated the world in 2012 hit “I Will Wait.” The album opens with the dramatic and atmospheric “42” before diving into vulnerable themes such as divorce and loss on tracks such as “If I Say.” Watch them give a track-by-track breakdown of their brand new album below. - Tiana Timmerberg

The title of The Smashing Pumpkins first album in four years is a mouthful, but the music on it is more manageable. Checking in at 8 tracks and 31 minutes, Shiny And Oh So Bright, Vol. 1 / LP: No Past. No Future. No Sun should be a treat for longtime fans. The Billy Corgan-led band has undergone numerous line-up changes over the years, but this effort features Corgan, guitarist James Iha and drummer Jimmy Chamberlin on record as a trio for the first time in 18 years. Shiny And Oh So Bright opens with the densely-layered, string-infused “Knights of Malta.” “Solara” and “Marchin’ On” are the hardest-rocking songs on the album and come closest to the Siamese Dream sound that broke the band in 1993. But if you’re more of a Mellon Collie And The Infinite Sadness fan, “Silvery Sometimes (Ghosts)” is the best track on the album. - Bob Diehl

Roughly two years ago, Michael Bublé put his career on hold after his oldest son was diagnosed with cancer. But now, born of the outpouring of love and support he and his family received from fans, the Canadian crooner is back with a message in the form of a brand new album, called Love, stylized as ❤ (heart emoji). Bublé has called the album a thank you to fans who showed nothing but love as the singer reportedly contemplated never singing again. Musically, Love makes it quickly apparent that the silky-smooth singer hasn’t lost a step while he delivers his own take on some iconic American records. The album features a number of classics, including “I Only Have Eyes for You,” My Funny Valentine,” “Unforgettable,” and the first single released, “When I Fall in Love.” - Kyle McCann

The fierce fifth album from Little Mix is strong, unapologetic, and dynamic. LM5 finds these four women building on their success, and really growing into their own. While the harmonies are still powerful, it's the anthemic feminism that's the focus. It's a loving but empowered set of bangers and ballads. While several songs seem destine for radio rotation, it's the early buzz on "Love A Girl Right" that has been the loudest so far. The threatening and throbbing tune repurposes Sisqo's "Thong Song" in thrilling fashion. - Michael Cerio

Also out this week is new music from Anderson .Paak, P.O.D., and John Mellencamp.