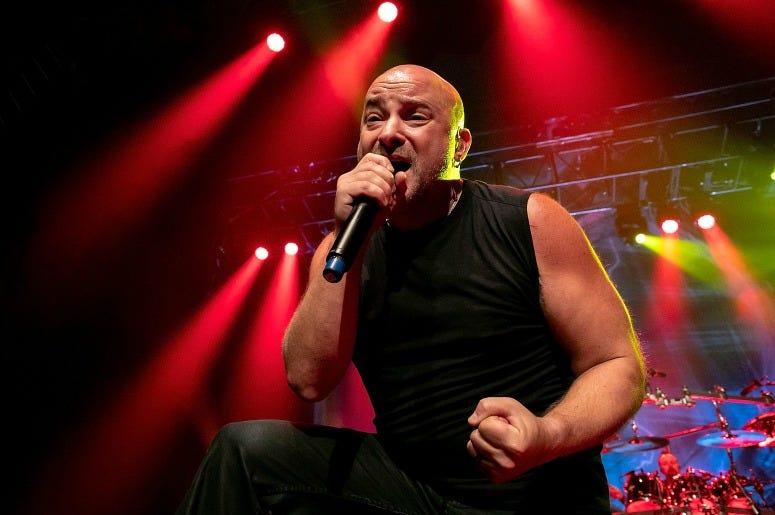 This week one of the millennium's biggest rock bands look to continue their number one streak, and the American Teen grows up on a new EP. Also the most buzzed about band of the year release their debut album, a strong singer-songwriter releases her sophomore album, and the alt-rock pioneers from Athens unveil a massive box set. These are the highlights from this week's New Music Friday.

Disturbed is back with an album that could easily be their sixth consecutive No. 1. The Chicago rockers' 10-track Evolution is their first release since 2015’s Immortalized, making the shift from straight pulsating rock to a diversity of tracks that show how the band has evolved over the three-year gap. With songs such as “A Reason To Fight,” “No More,” and “Already Gone,” Disturbed dives into deep topics that tenderly take listeners through dark subject matter. By mixing in more acoustic songs with the traditionally “Disturbed” driving rock, they’ve been able to present a convincing new sound while keeping the elements that have given them their widespread success. ​- Tiana Timmerberg

Khalid has just released his first ever EP, Suncity. A follow up to the singer’s American Teen full length studio album in 2017, the Texas native says he created this EP to give a sound to what this period in his life sounds like. While making Suncity, Khalid says, “I feel like I’m in the process of growing up.” He includes verses in Spanish and gives the rest of the project an R&B vibe that no one else can. It might actually put you in a chilled-out trance. - LA

It has seemed like a long road, filled with comparisons and surprises, but today we finally get the debut album from Greta Van Fleet. Anthem Of The Peaceful Army is the biggest moment thus far in a story than began being told nearly two years ago, when a band of mostly brothers from Michigan, captured the hearts and ears of rock fans around the country. We all know the plot by now. Song that sounds like a lost Led Zeppelin track is unearthed, but the howl of Robert Plant is actually a twenty-something from the midwest. What began as a parlor trick has grown into something much bigger, as Greta Van Fleet has taken the spirit of that era and has made it their own. Written and recorded during a two week stint in 2018, the boys still wear their influences well, but certainly have developed their own voice along the way. It's something familiar, but with an updated message of love and unity that stitches it all together. When they stretch their legs on songs like "Mountain Of The Sun", it's clearly an evolution into something that is all their own. Still, Greta Van Fleet is at their best when they drop that hammer and lean into their heavier tendencies, like on "Lover, Leaver (Taker, Believer)." Overall, it's a victory for rock n' roll true believers. - Michael Cerio

Elle King (Tanner Elle Schneider) is set to Shake the Spirit with the release of her sophomore album. The alt goddess has delivered a 12-track collection which includes her latest radio hit, “Shame.” The 29-year-old revealed to People that it “really is such emotional music” while providing “candid lyrics to country-tinged rock and soul.” King reveals her real-life struggles with her fans through her new tunes, while proving you can come back from just about anything. - Lauren Hoffman

People of a certain age remember R.E.M. as one of the first “alternative” bands that the cool kids liked in school, before the band fully hit the mainstream with 1991’s Out of Time, featuring the mega-hit “Losing My Religion.” The Athens, Georgia band haven’t given us a studio album in seven years, but we do have something new to listen to: R.E.M. at the BBC, an 8 CD & 1 DVD box set. There’s also the more manageable The Best of R.E.M. at the BBC, a 2CD or 2 LP collection. The releases feature rare and unreleased live and studio recordings. The performances span the band’s career, from an energetic rendition of “Radio Free Europe” in Nottingham in 1984 to the fan favorite “Orange Crush” taken from a radio show in 2004. It’s not new music, but it's something that should give fans plenty to chew on until, if, and when the band decides to reunite. - Bob Diehl

Also out this week are new releases from Lil Yachty, MØ, and Peter Bjorn And John.