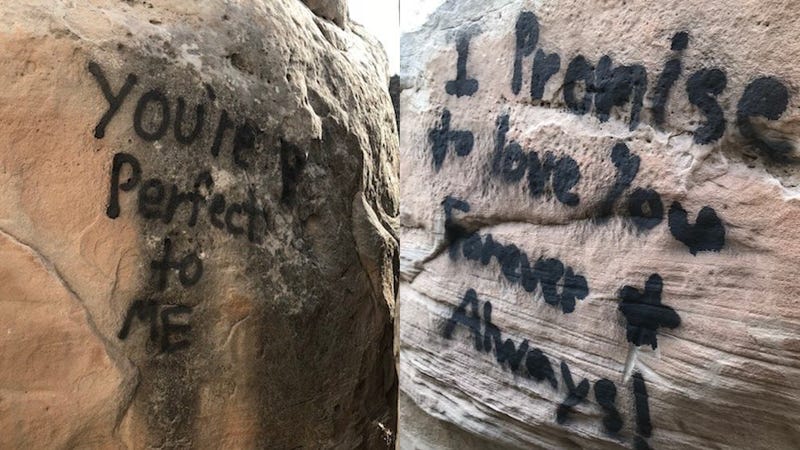 Prom proposals, or "Promposals" as they're more socially known, are getting more and more elaborate... but one person may face jail time over how they decided to pop the question!

Someone spray painted "I promise to love you forever + always," and "You’re perfect to me" across two rocks, and on another they wrote "Prom….ise?"

While the gesture may seem romantic park officials weren't too happy, sharing the pictures on Facebook writing, "Unfortunately, there is graffiti in Colorado National Monument. If anyone has any information about seeing anyone doing graffiti in the monument, please contact the visitor center at 970-858-3617 ext. 360. Thank you."

Unfortunately, there is graffiti in Colorado National Monument. If anyone has any information about seeing anyone doing...

Now the cost of going to prom could be much higher for whomever made this elaborate ask. The suspect could face up to six months in jail and a $5,000 fine.

Authorities say the best way for this person to impress their date now is to come forward and take responsibility for their mistake. In a statement, the National Park Service said, "Officials at Colorado National Monument are offering a $500.00 reward for information leading to the conviction of individuals who spray-painted love notes and a prom proposal on the White Rocks formation."

While they think the rocks can be restored, cleanup will be difficult as the area is far from any running water and other supplies.