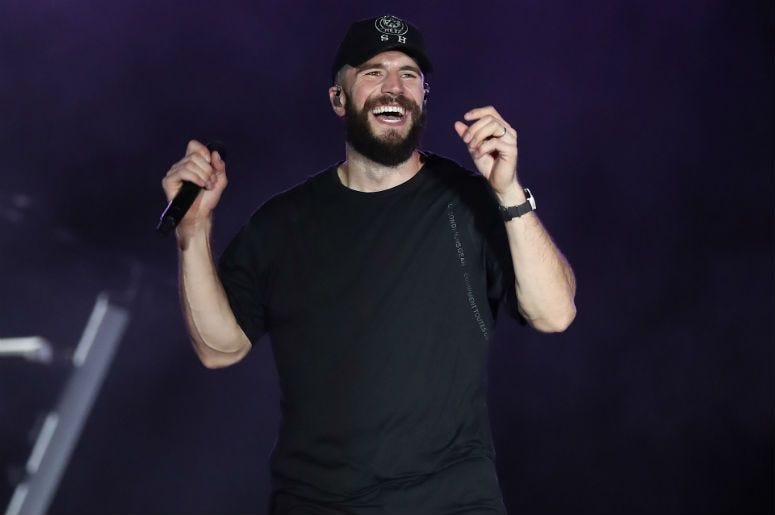 It's been 6 months. SIX. MONTHS. Since Sam Hunt has posted on social media... this is on top of an unusual year, even for a very private Sam Hunt... a look back...

In 2017, Sam Hunt used to have a very full, extremely artsy Instagram account. Most of the pictures were concert performance shots or backstage hangouts taken by a photographer who toured with Sam... Remember all of those shots of his wife Hannah Lee Fowler when he released "Body Like a Backroad?"

Fast forward to May 2018 when Sam deleted them... in fact, he deleted ALL of the photos from his Instagram!

The reason? To announce his second single since the release of his debut album, Montevallo back in 2014.

The single, titled "Downtown's Dead," was popular and did ok on the charts, but it didn't make it to #1 like his previous 5 singles "Leave the Night On," "Take Your Time," "House Party," "Make You Miss Me," and "Body Like a Back Road."

Eight very colorful and artistic photos were shared on his account to promote "Downtown's Dead," and he would go on to post just 10 more photos by mid-2018 before going completely dark.

Then Sam was out on the road with Luke Bryan for his baseball stadium tour. The last picture he posted to Instagram was from their tour stop in Boston at Fenway Park in July, which was nearly 2 months before their show in Chicago on September 1st.

Sam's last concert date was October 26th, in Detroit on Luke Bryan's tour... and he has nothing scheduled so far for 2019 until the end of April for Stagecoach, followed by an appearance in Texas in May and another in Colorado in June. His website is looking very clean... with just three promos for his upcoming appearances and a playlist embed with a single song: "Downtown's Dead."

Sam's official Facebook page has mostly (if not entirely) been populated with posts from his team versus himself, and even so, the last post was back in November for a Black Friday merch sale. The same goes for Sam's Twitter, which last posted on November 26th about said merch sale.

In terms of new music, there was a new single lined up and pre-promoted titled "Nothing Lasts Forever," but it was never officially released as anticipated. All fans have to go on is the preview he gave of the song during some live shows back in May:

Well, we know that after marrying his longtime flame, Hannah Lee Fowler (the woman who inspired most of Montevallo), on April 15, 2017, the two stepped out of the spotlight for a bit to spend time together as newlyweds. Sam revealed in an interview back in June (2018) that after being married for a year, the conversation has come up with his wife about children.

"She’s like 'Well I want us to spend our time together before we have kids.' With as busy as I’ve been with music it hasn’t really felt like we’ve gotten to have that young adult marriage time to really bond," said Sam. "So we’ve compartmentalized that a little bit and tried to also incorporate that into what I’m doing as we tour and do this music thing."

It was something that Sam had touched on the month before, in fact, at the BBMAs when he thanked his wife for "sacrificing so much for [him> and [their> future."

I know that song like the back of my hand. @SamHuntMusic is taking home the #BBMAs for Top Country Song! pic.twitter.com/BfNZAFr5v2

So one could assume the couple is taking some much deserved time to themselves... but rumor has it, new music could also be to blame for Sam's absence.

Sam revealed that writing has been different for him since he married Hannah, because he's in a completely different space mentally & emotionally. He said, "What do I want to say now? I’ve always been inspired from more of a sad, dark place and I haven’t felt that emotion in a long time. Now I’m doing other things because I don’t need that therapy as much anymore.”

With new inspiration and song content comes a different work flow as well.

“I have lots of songs in pieces right now,” said Sam. “I don’t necessarily have a record ready. I don’t have quite enough continuity in the songs I’ve been working on.”

That's what Sam had to say this past summer and a lot of time has passed since then. Now that doesn't mean his sophomore album is complete, but we're not entirely new-music-less... he still has "Nothing Lasts Forever," to officially release as a single. Although we expected it to be out during the second half of 2018, music release dates get pushed back all the time.

And if you're looking for one more little glimmer of new-music-hope... remember back to April 2017 when Sam shared that HE doesn't like waiting either!

So we're not entirely sure where Sam Hunt is or what he's up to, but we think it's fair to say that in addition to some much-needed time away, there's also a good likelihood new music is on the way.