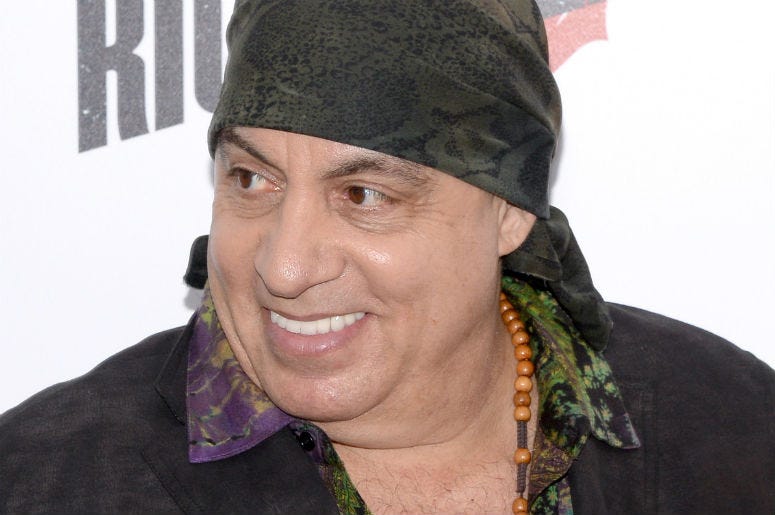 "Though born in Boston, Massachusetts, there is no purer distillation of the Jersey ethos than 'Little' Steven Van Zandt," is what BRUCE SPRINGSTEEN said of Lil' Steven, who, over the weekend, was inducted to the New Jersey Hall of Fame.

Mr. Van Zandt was feted along with Jersey natives Meryl Streep, The Four Seasons, Debbie Harry (Blondie), and Gloria Gaynor, but it was the surprise appearance of Steven's pal, bandmate, and co-conspirator Bruce Springsteen that clearly thrilled the appreciative hometown audience.

Bruce spoke warmly of his first meeting with Van Zandt and the lifetime friendship that has been the result. He also gave Steven his "props" for everything he's done outside of The E Street Band, namely his solo albums, his collaborations, his role of Sylvio Dante on The Sopranos, and his charity endeavors. Lil' Steven's Rock and Roll Forever Foundation and the TeachRock program are his "greatest legacy" according to Bruce.

After all the accolades, it was Lil' Steven's turn at the mic: "I had the experience of witnessing New Jersey become fashionable twice in one lifetime. Thank you, New Jersey; you have been very, very good to me," Van Zandt joked, later noting that if it wasn't for New Jersey, he never would have met Springsteen, a previous New Jersey Hall of Fame inductee. Read more about Lil' Steven's induction to the NJ Hall of Fame here.