Didi Gregorius is sitting in the dugout at Yankee Stadium, and he has goosebumps. Yes, it has something to do with October, but not the playoff run that’s about to begin. It’s about the connection he made with Danielle DeSimone.

It began last December when DeSimone, then 20, was six months into a battle with acute myeloid leukemia. Gregorius, her favorite Yankee, was making a promotional appearance at a T-Mobile store in Manhattan. Glenn Kubik, DeSimone’s former math teacher at East Northport Middle School, took the train in from Long Island and asked the Yankees shortstop to sign a bat for her. The perfect get-well present, he thought.

Gregorius did more than sign the bat. He helped create a symbol of perseverance that many Yankees fans have seen whether they realize it or not.

“Show people that you actually care,” Gregorius says. “I was always raised that way. I care.” 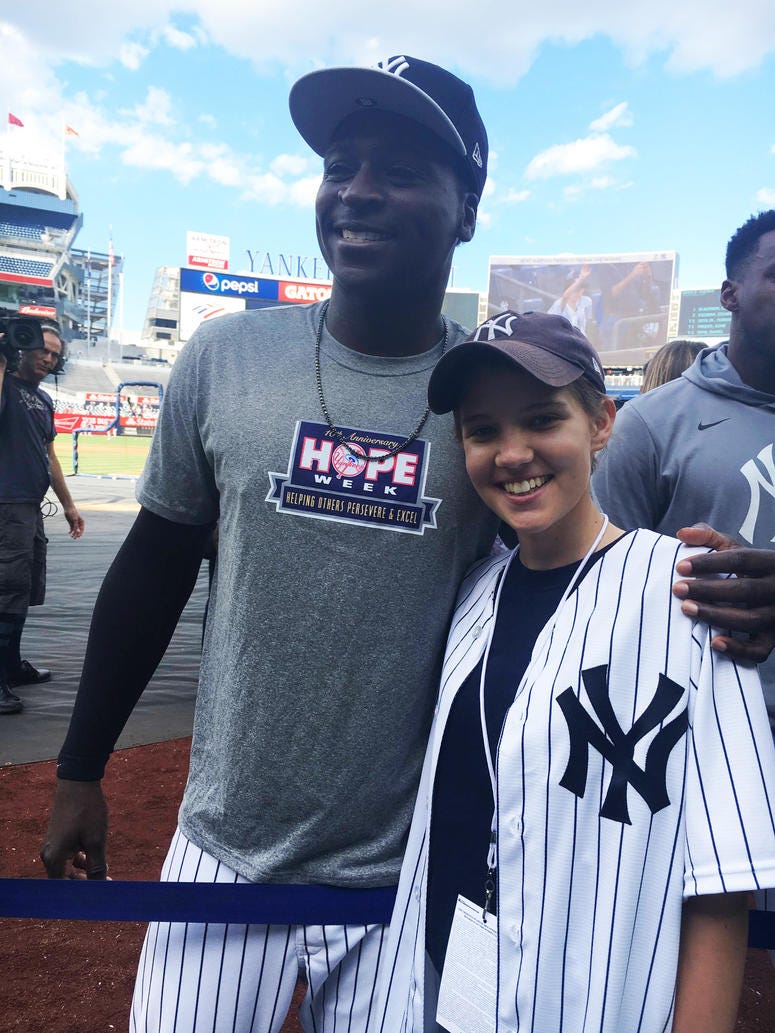 “The cleats even had the dirt from the field on them,” DeSimone says. “It was really cool.”

Gregorius is a relentlessly positive person. And he knew how important positivity is in the recovery process. He was recovering himself from Tommy John elbow surgery, performed two months earlier on Oct. 17.

This is a detail — that they both had surgery on the exact same day — that Gregorius doesn’t know until he is told in the Yankees dugout almost a full year later. And when he hears …

Officially it’s all part of #DIDIsDEEDS, an idea he created before arriving in New York but which has taken flight since he’s become a star for the Yankees. In this role, Gregorius is a cross between Roy Hobbs, Ellen DeGeneres and Santa Claus.

He will visit sick or underprivileged children and bring specific gifts after finding out details about each child. Or he will deliver flowers to women in the Yankees offices to wish them a happy Mother’s Day. Or he will spend an off day in Toronto buying tickets for strangers to ride the subway or visit the top of the CN Tower.

Some of these deeds of goodwill have been chronicled on the Yankees’ on-demand YouTube channel, while others happen behind closed doors.

“I don’t need the camera to be there all the time,” Gregorius says. “I want it to be coming from the heart.”

When the @Yankees begin their #Postseason tomorrow, there will be a student at Manhattan College cheering hard for her favorite player, Didi Gregorius.

Here's the incredible story of how a @DidiG18 autographed bat became a friendship. #NextManUp pic.twitter.com/76sb651tdg

With DeSimone, now a 21-year-old engineering student, Gregorius found a connection and wanted to do something special. He could have been corny and just promised to hit a home run for her. Instead, he reached for something directly from the heart.

You might have noticed how Gregorius has specialized, unique  handshakes for everyone on the team. There is the little salsa dance he does with Gleyber Torres and that steering wheel turn he does with Aaron Judge. And so on.

When they finally met at Yankee Stadium in June, Gregorius and DeSimone came up with their own handshake, one that he said he would do after he hit a home run. It was less a handshake than a signal, a “hang-10 sign” that DeSimone nervously suggested, perhaps a throwback to her freshman year at UC Santa Barbara when she learned a little surfing.

As promised, the first thing Gregorius does after crossing home plate following a home run — before he even shakes hands with his teammates — is flash the signal. 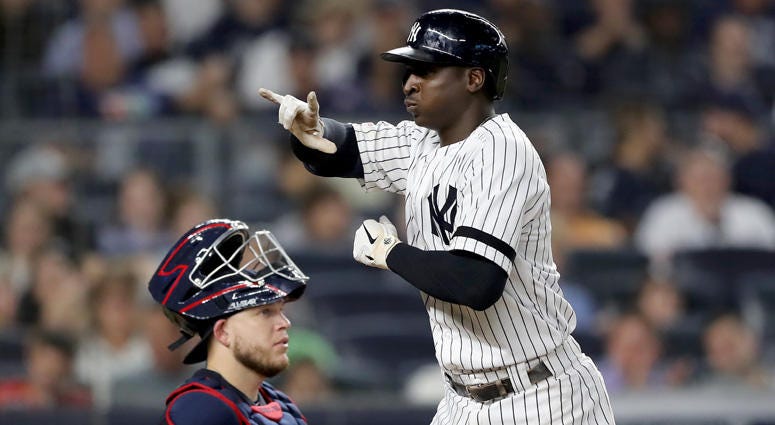 “As soon as I hit it, I think of her,” Gregorius says with a brilliant smile. “Because I can’t wait to step on home plate and show her.”

“I was watching the game in London on TV with my family when Didi hit a home run,” DeSimone says. “We saw him do the handshake and we were like, ‘Oh my Gosh!’ We couldn’t believe it. I thought he was only going to do it if he hit a home run in the game we went to.”

Gregorius signaled to DeSimone after every home run this season. It is a symbol of their kindred spirits, fighting through pain and challenging themselves to move forward to find what else life will bring them.

“I feel like (the signal) reflects a little bit of Didi’s easygoing personality,” DeSimone says.

“I don’t like showing emotions during the game,” Gregorius says.  “I want to stay mellow the whole time, stay even. There’s a lot of obstacles (in the game), ups and downs. Life is the same thing.”

“I think Didi and I are similar,” DeSimone says. “We both expect a lot out of ourselves.”

DeSimone’s obstacle — leukemia — was diagnosed in June 2018. A series of scans and neurologist visits failed to provide answers before a family friend, Dr. Jonathan Lown, of Commack, finally brought her the bad news and sent her immediately to North Shore University Hospital.

“It felt surreal,” DeSimone says. “I felt like at any moment they were going to walk through the door and be like, ‘Oh no, we didn’t mean that. That’s not what’s really happening.’”

There was chemotherapy, the bone marrow transplant and then came the really hard part. For months, the simplest tasks became major endeavors. She struggled to get off the couch to shower or brush teeth because so much of her strength had been sapped.  Finally in March, around the time her new friend, Didi, was in spring training working on his rehab, DeSimone started to feel better. 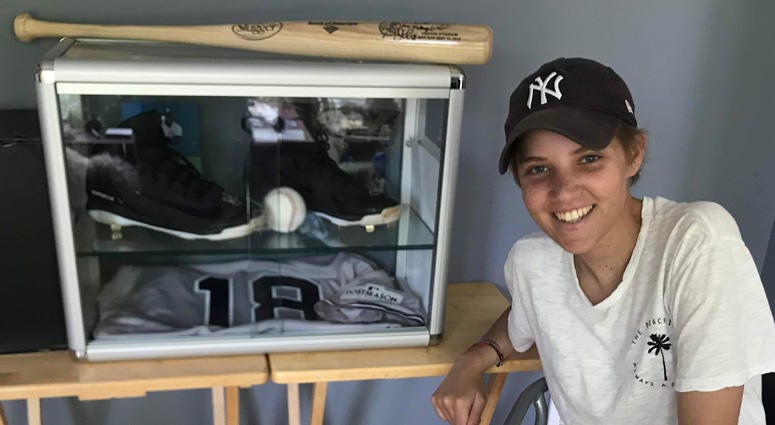 Part of Gregorius’ connection to DeSimone was an understanding of her process, but not because of his elbow injury.

“I didn’t have anything as bad as she did,” Gregorius says of her leukemia. “But I had problems with my kidneys at the same age.”

Serious problems actually. Malfunctioning kidneys and sky-high blood pressure sidelined Gregorius back in 2011 when he was a minor leaguer in the Reds organization. He lost more than 30 pounds and missed half the season recovering. He was 21 years old, the same age DeSimone is now.

And now she is a full-time student again, but closer to home. DeSimone transferred from Santa Barbara to Manhattan College in the Bronx and began classes in late August She is interested in pursuing a degree in civil and environmental engineering.

Her doctors were hesitant about taking a full course load so soon, but DeSimone was not.

“I was pushing to get back to school,” DeSimone says. “I wanted to push myself because I knew that the everyday events, going through those motions, would get me stronger faster. Kind of like how Didi learned the piano (last offseason), to push himself to get better faster.”

Gregorius hears that last sentence read to him and doesn’t say anything. He just points to his arm.