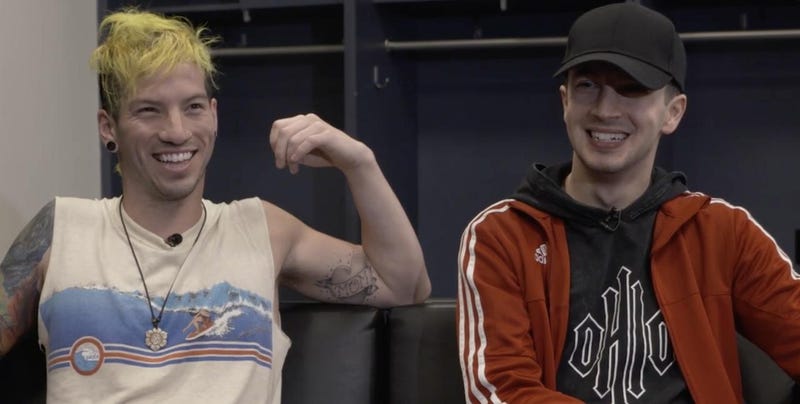 Kings of cryptic clues Twenty One Pilots have finally returned with a new yet equally mysterious era.

The band’s signature eye has re-opened, marking the official return of TØP. The first singles “Jumpsuit” and "Nico And The Niners" are here and we’re living for them.

Josh Dun and Tyler Joseph took the alt scene by storm with their 2015 release of Blurryface, a perfectly dark and wonderfully unique album that delivered hit after hit. From “Stressed Out” and “Ride” to “Tear In My Heart” and “Heavydirtysoul,” these two are no strangers to radio hits.

But... it hasn't always been that way. Watch them reminisce about the first time they heard themselves on the radio, a weirdly underwhelming experience that ended up taking them where?

Their newest singles “Jumpsuit" and "Nico And The Niners" are sure to be new additions to their ever-growing list of chart-toppers. The riff-driven "Jumpsuit" is infuriatingly catchy and takes the band in a new direction while still being a pure Twenty One Pilots masterpiece.

I wonder if they'll celebrate hearing it on the radio the same way? Their upcoming album Trench is due October 5 but, in the meantime, listen to their new singles here: