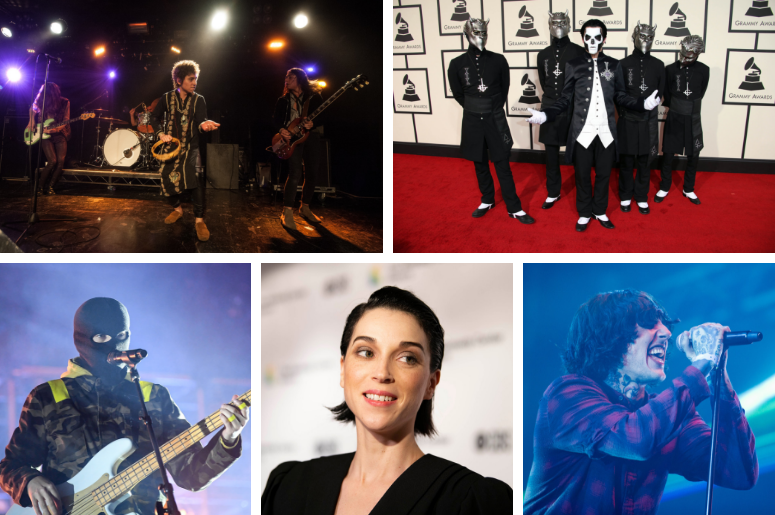 The 61st Annual GRAMMY Awards’ Best Rock Song category is a songwriter’s award that recognizes some of the biggest tracks in rock. In rock more so than most other genres’ versions of the same category, the names mentioned are dominated by members of the bands rather than outside songwriters and producers.

Here are the nominees being showcased for their writing abilities and original creations:

This is one of a number of GRAMMY nods for newcomers Greta Van Fleet, introducing their name to the list of nominees with in a huge way that includes Best New Artist. “Black Smoke Rising” appears on their debut album, Anthem Of The Peaceful Army.

After telling RADIO.COM they would accept their 2017 GRAMMY for Best Pop Duo/Group Performance in their underwear and then actually doing it, Twenty One Pilots are back with another nomination. “Jumpsuit” came as one of a pair of singles marking the duo’s highly-anticipated return, kicking off an era surrounding recent album Trench.

BRING ME THE HORIZON – “MANTRA”

Without even releasing another album, British rockers Bring Me The Horizon have found themselves with a Top 10 radio hit and their first GRAMMY nomination. “MANTRA” is the first single off of their upcoming amo, due January 25.

The airy and atmospheric singer Annie Clark, better known as St. Vincent, makes the list as one of the only females nominated across all rock categories. The piano ballad was co-written by Bleacher’s Jack Antonoff.

Swedish metal band Ghost continues their reign as one of the biggest modern metal bands with their second and third GRAMMY nominations. Maintaining the anonymity kept through masks constantly worn by the band, the Prequelle track is credited simply to “A Ghoul Writer.”