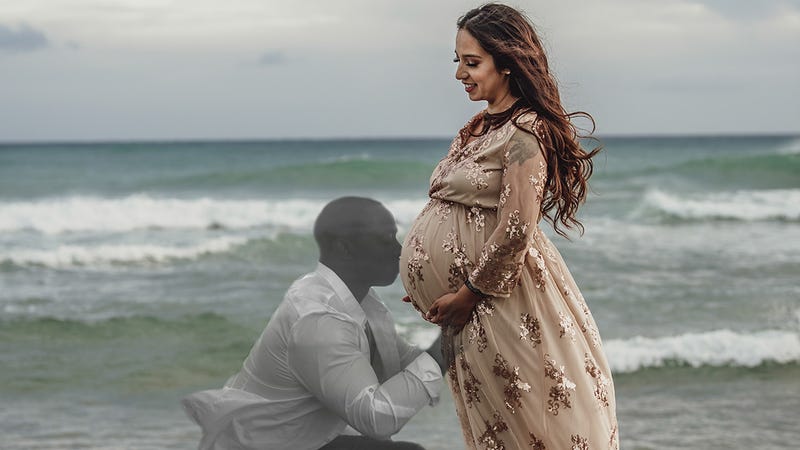 After Stephanie Maynetto-Jackson lost her husband Stuart, she wanted to keep his memory alive by including him in a family photo even after his death. The two were active duty soldiers in the U.S. Army, married in 2013, and have two boys together.

In a blog post on Love What Matters Stephanie explains, "When Stuart II was born this past May, I went through every emotion possible. As much support as I had there with me, I felt alone. I was alone in this journey because the man I had committed to bringing another life into this world with was no longer by my side. He had been taken from me and the anger started to consume me. For months I focused on keeping my emotions controlled to prevent anything from happening to our blessing, but that day was the day I finally let it all out. As each contraction became stronger than the last, I closed my eyes to deal with the pain but all I saw was Stuart’s face. I wanted to cry, but I had to be strong."

When Stephanie took maternity photos while pregnant with their second son, she had photographer Phoenix Sipin of KM Ivelisse Photography include a ghosted image of her late husband who was killed last year in a motorcycle accident. Stephanie tells Radio.com, "I feel lucky and blessed to have these photos but it also breaks my heart. It is a reminder of the love we shared and the love we wanted to share with our children. It is also a reminder of the love that was taken from us."

Stephanie says these photos are a way to honor the man she loves and make sure her children never forget their father.