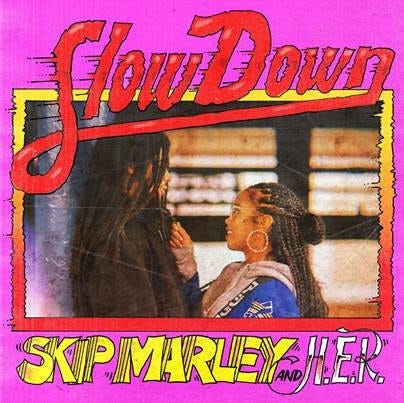 “Bob Marley’s grandson living up to his lineage while finding new ways to push the boundaries of the genre….” – Rolling Stone

“a proper introduction into a new Marley generation” – FADER

“The younger Marley has steadily generated heat for himself”- VIBE

The amazing chemistry between Skip and H.E.R. was on full display, when they performed “Slow Down” live for the first time, stopping the show at H.E.R and Lauryn Hill’s historic Hollywood Bowl concert last month.  Today’s release of “Slow Down” is a much-needed breath of fresh air from Skip and H.E.R. as Skip gears up for the release of his much-anticipated forthcoming project.

Earlier this year, Skip issued “That’s Not True,” a collaboration featuring Damian “Jr. Gong” Marley (his uncle).  They performed the track together at Kaya Fest in Miami, where the VIDEO was shot.  Skip’s follow up, “Can’t Take it From Me” featuring Major Lazer was first performed live onstage at New York’s Governors Ball fest this summer.  Along with “Enemy,” which was also released earlier this year, Skip earned critical acclaim from Rolling Stone, Fader, Hypebeast, Vibe, and others.  Last month, he also released “Call Me Human,” the buzzed about track with French Montana from the hit EPIX original series Godfather of Harlem soundtrack.

“I don’t really think about how I want to be perceived by people. They have their own projections. I just want them to see me as a fighter for good. A love warrior.”  23-year old Skip Marley often speaks in this way – rare combination of serious and cool.  Jamaica-born and Florida-based, Skip is mysterious and chill, but deeply connected to his craft and refreshingly self-assured.  He is authentic in a way most musicians these days could never claim to be; when he says he’s never thought about how people perceive him, it’s without any pretense or irony.

His music follows suit, a reggae-hybrid that effortlessly blends eras, genres, and styles, while showing off Skip’s impeccable musicianship and poetic lyricism.  His natural talent comes as no surprise – music is quite literally in his blood; he is the grandson of reggae icon Bob Marley.   Skip’s songs pay homage to the deep and widespread legacy of the Marley family, which includes his uncles, reggae greats Ziggy, Damian and Stephen; and his aunt, singer Marcia Griffiths of the renowned I Three female vocal trio, with Skip’s grandmother Rita Marley.

“I want to spread my music to the people and help them unify,” he says.  “I want people to take away a message of love, of looking at the way you are living and thinking where we can work to be or better and feel better.  Whatever they’re feeling, I want them to be able to turn up my music and think, relax, and get good vibes.”  It’s a radical idea maybe, but an essential one.

Enigmatic singer/songwriter/multi-instrumentalist H.E.R. has established herself as one of modern R&B's most fascinating new talents. With two sold-out headlining tours and over 2 billion streams for her two remarkable EPs – H.E.R. and I Used To Know Her, the 22 year-old won two Grammy Awards this year for Best R&B Album (H.E.R.) and Best R&B Performance (“Best Part” featuring Daniel Caesar). Her latest release,I Used To Know Her, debuted at #1 on the Billboard Top R&B Albums chart, while fan favorites “Focus,” and “Best Part” earned the #1 slot on the Billboard Adult R&B Songs Airplay chart and Urban Adult Contemporary chart, respectively.