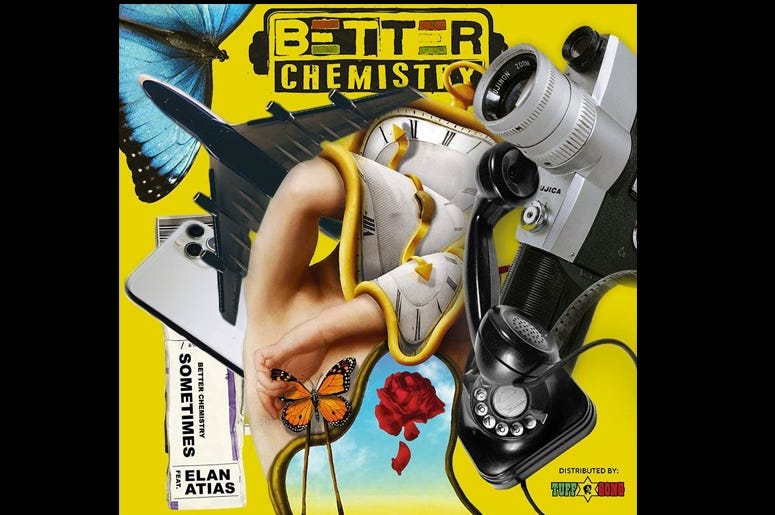 So. California based Reggae band BETTER CHEMISTRY has released their highly anticipated new single, "SOMETIMES" ,released March 27 from their upcoming album coming later in 2020.  The band enlisted the talents of ELAN ATIAS, the multi-talented LA based singer / songwriter and former lead singer of the The Wailers Band.  Released on the Better Chemistry Music label, the single is available now on all digital services worldwide distributed by Tuff Gong International.

"I’m so proud of this new release “Sometimes.”  The crazy part is Elan Atias and I wrote it months ago but the lyrics feel like they were written today.  It’s about how disconnected we’ve become from technology, but how relevant and useful it is. It’s all about moderation I guess. What are you thoughts?" offers lead singer / guitarist Dave Monaco of Better Chemistry.

Those are just a few words to describe the band, Better Chemistry, who have been overwhelming audiences since 2001 with their explosive brew of Reggae, Ska, Funk and Rock. The band’s positive vibe and “let the good times roll” approach has won them a devoted following and a career’s worth of accomplishments. You might have heard their music during a Lakers game on Fox Sports Net (“Sunday Night, Lakers Night” and “Purple and Gold”), or on the radio (KROQ 106.7 FM, Los Angeles, KISS FM London). However, the real experience is their live performances.

The band’s story started at the Bulldog Pub in Upland, CA at an open-mic night where the band’s members first met in 2001. Discovering a common group of influences (Bob Marley, Toots, Dennis Brown, The Clash, The Specials and Sublime) the band came together and quickly built up an impressive resume, opening on-stage for BB King, UB40, Steel Pulse, Aggrolites, Third World, Berlin, Average White Band, War and recording and performing with Pato Banton, Chali 2na, Tippa Irie, Shinehead and Papa Michigan from Michigan and Smiley (Studio One). The band’s debut album from 2001, Undiscovered Elements, is when the band realized there was something magical that was happening. The 12 original tracks were recorded live in a garage after 6 weeks of coming together.

Better Chemistry has written and produced tracks for Fox Sports Net that gained national airtime. “Frozen in Your Tracks” aired on January 27, 2007 during the Los Angeles Kings game. “Purple and Gold” was aired during the 2008 NBA Western Conference Championship and “Sunday Night, Lakers Night” ran multiple times during the 2009 - 2011 seasons.

6 Foot Shorty, their second album released in 2007, was a step forward in the band’s evolution, showcasing their growth and development as songwriters and players, while hewing to the warmth and positivity that has been the hallmark of their sound.. Adding to the flavor and variety, Pato Banton features “2 Steps Back” and the Hip-Hop / Dancehall styles of Chali 2na and Tippa Irie on “6 Foot Shorty“. The song “MCII” is licensed to Yamaha Motor Sports for an ad campaign featuring professional motocross riders on the Yamaha team.

The self-titled EP, Better Chemistry, is when the band opened the path to roots music, encompassing the traditions of Ska, and really started to blend genres. The cover song of Peter Tosh’s “Ketchy Shuby” was selected for the Peter Tosh Tribute Album that featured The Jerry Garcia Band, Edi Fitzroy, Andrew Tosh and Daddy Roots, released in 2005.

The fourth album release from Better Chemistry was in 2013, featuring Aalon, Pato Banton, and Roger Rivas from the Aggrolites. Tracks “Watch Your Back” and “Sweet as Reggae” were produced by Leroy Osbourne (Sade), and are featured on the UK FLU 2 compilation.  It’s a mix of original music, classic Reggae cover songs showing growth expressing their musicianship and pushing traditional boundaries.

The evolution of the band resulted in some new members joining the band, re-igniting the band’s flame.  The new inspirations and idea led to the Sweet As Reggae album focusing on all new music from the group..

The fifth and latest studio album FRUIT OF LIFE was released in August 2017 through Bob Marley’s legendary record label and distribution company, Tuff Gong International debuted at #11 on the Billboard Reggae Album chart.

The band had a busy 2018 with a full schedule of shows and connected with French based singer Delphine (and fellow Tuff Gong International distributed artist), to release the single “It’s You.”  They released their most recent single "Hope That It's Real" in late 2019.  Better Chemistry are in the studio now wrapping up work on their new album set for Spring 2020 release and performing dates all over with their 2020 summer tour taking shape.   The vibes are right !