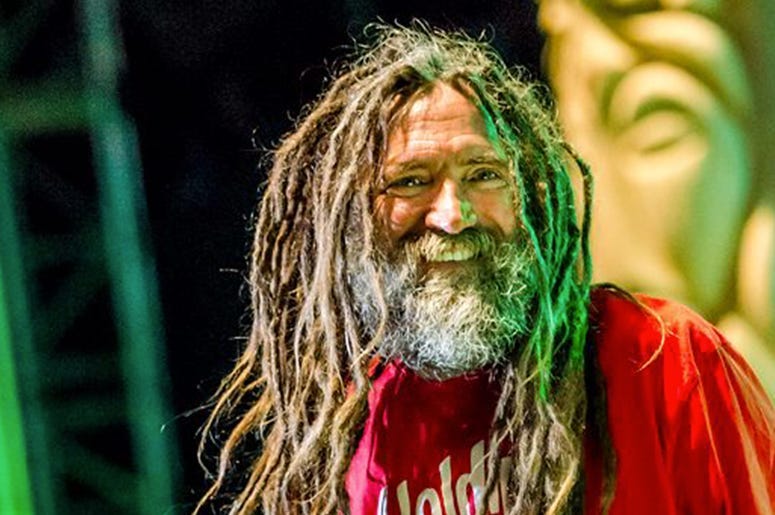 M.C. Rasta Stevie "The World Emcee" has been doing Reggae Radio and proponent of Rastafari for over 35 years spreading the musical message of love. Rasta Stevie Smith has done everything from Reggae Radio to 8750 Reggae Band the Award Winning Nationally Touring Reggae Band to MC extraordinaire to Promoter and more. Rasta Stevie never stopped doing his radio show the entire time whether on the road here or abroad. He is a real general in our World Wide Reggae Movement. Check out the history, goosebumping highlights and the future.

Rasta Stevie, “The World Emcee” is a 35+ year veteran in Reggae music and Rastafari. His career began in 1982 as a radio station personality and disc jockey in Boulder Colorado. In 1984, he founded the Heart Beat of Zion Sound System. Since that humble beginning, he has either hosted or been a guest on radio stations in Telluride and Durango Colorado; all across Colorado, the US, Hawaii, the Philippines, Jamaica, Bali Indonesia, Morocco, Guam and Costa Rica. The Heart Beat of Zion has been voted the best reggae radio program in Colorado numerous times. Rasta Stevie’s interview skills are legendary in the reggae industry, as noticed by VP Records director for their on line radio station, Randy’s Reggae Radio, where Rasta Stevie was recruited to produce a weekly radio program starting in 2012-2015. Currently, the Heart Beat of Zion is the longest running radio program on KDUR FM Durango.

His first trip to Jamaica in 1985 solidified his role as a spokesperson for Rastafari Internationally. In 1987, Emcee Rasta Stevie became the first white dreadlocked Rasta elected official in the US and possibly the world. His political career was documented in 1988 via the world largest selling home ski video in 1988, “The Blizzard of Ahhs”, launching international stardom. In 1987 his service to reggae broadened to include bookings, promotions and production. He also began a teaching career, travelling the world hosting and teaching seminars and classes in the fundamentals of Rastafari and its related Reggae music. He is a charter member of Reggae Ambassadors Worldwide and was the featured speaker at the 1995 convention in Las Vegas.

In 1988 he founded the 8750 Reggae Band, “The World’s Highest Reggae Band.” The band toured the Western US and Canada through 1996, performing all original music up to 150 shows per year. Their debut album was voted "the #1 US based Independent Release for 1993" by the leading reggae publication of the day, Reggae Report.

In 1992 Emcee Rasta Stevie began yet another service to Reggae and Rastafari as festival host/emcee. Over the next ten years he was the host of the One World Music Festival, noted as the first festival to bring Bunny Wailer out of self imposes exile in Jamaica and place him at the top of the festival circuit. From 1995 until 2015, Rasta Stevie was the host and emcee Reggae on the River/Reggae Rising, the most loved and longest running reggae festival in the US.

The Spirit of Unity Festival recruited him for the western leg of their 1997 and 1998 world tours. Then from 1997-2002, he was a rotating host of the Apache Bar’s live reggae bands 7 nights a week sessions in Bali Indonesia.

In 2006, he left babylon and moved to the Osa Peninsula in southern Costa Rica and began spreading the One Love message in Rasta Rica. As a DJ, Emcee Rasta Stevie has performed his Noche De Reggae on his Heart Beat of Zion Sound System in San Jose, Playa Del Cocos, Tamarindo, Nosara, Samara, Mal Pais, Jaco, Quepos, Dominical, Puerto Jimenez, Cuidad Nelly, San Vito, Agua Buena, Monteverde and of course in Puerto Viejo. As a festival host, he has been in demand in Rasta Rica, host/emcee for Steel Pulse in Jaco, Irie Fest 2010, Guanabeach Fest in Playa Del Cocos twice, Easy Street Festival in Puerto Viejo, Rainforest Aid 2009 in the Osa Peninsula and more, including Luciano for four shows in Rasta Rica, three of which he booked and two of which his Heart Beat of Zion Sound System performed the tracks for “the Messenjah” and Mikey General to sing.

The management of Rising Sound saw Emcee Rasta Stevie at Reggae Rising in California in 2008 and hired him for their events across Rasta Rica, including nationwide tours with Gentleman, Pressure Busspipe, and Cultura Profetica as well as Irie Fest 2010 with Jah Cure, Michael Rose, Richie Spice, Pressure, Cultura Profetica, Cali P and many more.

Upon his return to the Ganjarado in 2010, his life skills melded with the burgeoning legal cannabis industry. As founder and manager for Animas Herbal Wellness Center, the leading Medical Marijuana retail store in Durango, Ganjarado, he became the Cannabis liason, spokesperson and lobbyist for the industry. He also served as the Brand Ambassador for Animas Herbal’s wholesale division, Prohibition Herb.

In 2011, he returned to the Colorado festival circuit hosting and or dj at the Roots River Festival in State Bridge in June and the Soul Rebel Festival in Boulder County in July.

Rasta Stevie was hired as organizer, judge and publicist for The Telluride Cup and Conference 2013. His annual appearances with the Heart Beat of Zion sound system at the HIGH TIMES US CANNABIS CUPs 2012- including 2015’s cameo from Bob Marley’s grandson Jo Mersa Marley drew rave reviews and landed him the selector position at Julian Marley’s Juju Royal Cannabis Launch Party 2015 and 2016.

Emcee Rasta Stevie was flown to California in 2014 to host/emcee the Humboldt High Grade Harvest Gala. Then for 2015 & 2017, he took over Reggae on the Rocks, in 2017, he was flown to Santa Rosa California to host/emcee Reggae Sunfest.  In 2018 & 2019 he co-produced and hosted/emceed Reggae on the Grass festival at the Levitt Pavilion in the Mile High City.  Also in 2019, he hosted/emceed Roots Rock Equinox festival in SW Colorado and the One Love One Heart festival in Woodlands, Ca. He continues to emcee concerts in Durango and beyond.

The Heart Beat of Zion is still the longest running radio program, and one of the most listened to programs on KDUR. Recent HBZ club appearances are drawing rave reviews including the Bob Marley Birthday Bashment in Telluride, The Taste of Durango and well as private functions where the HBZ performed 7 hours of strictly vinyl.

Give your patrons the quality they deserve: a concise and entertaining memorable event through his hosting/emcee/lectures/DJ services/seminars/production with: