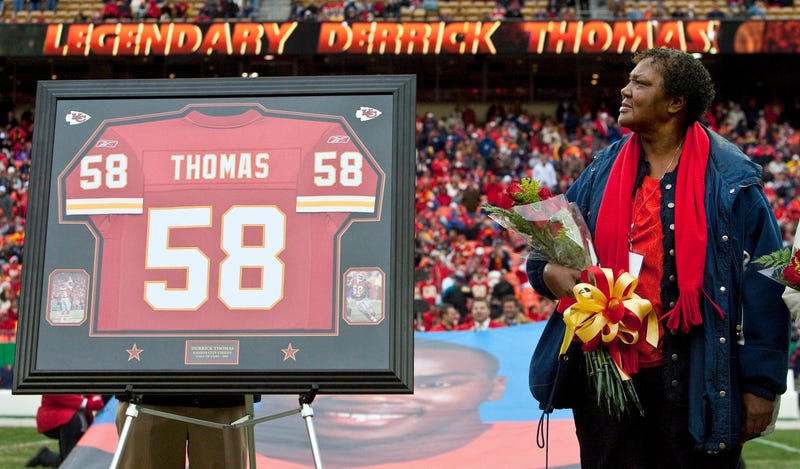 On Nov. 11, 1990, in just his second season in the league, Chiefs linebacker Derrick Thomas set an NFL record with 7.0 sacks against the Seattle Seahawks.

It was pure dominance.

“They were a good, solid team on defense. Derrick Thomas, though, he was the guy, the catalyst. He was the one that gave them the energy,” Seahawks radio play-by-play announcer Steve Raible said on The DA Show. “He had been the Defensive Rookie of the Year the previous year. He came off the corner so quickly. He wasn’t as big as LT (Lawrence Taylor), but he was faster than any linebacker we could imagine. Getting off the edge is one thing; getting the corner over an offensive tackle is one thing. But being able to flatten out and get to the cornerback is something else – and he was something else.”

The Seahawks did everything they could to keep Thomas at bay. None of it worked.

“You start to get frustrated by watching this guy come off the edge,” Raible said. “You’re helping, you’re chipping with a tight end, you’re turning your fullback outside to help – and even with David Krieg trying to step up in the pocket, Derrick Thomas was still getting to him. They made it a very long day for the Seahawks.”

One of Thomas’ sacks led to a defensive touchdown for the Chiefs. In fact, it gave Kansas City a 16-10 lead in the third quarter.

“What a lot of people don’t remember in this is the Seahawks had a pretty good defense in those days, too,” Raible said. “To keep that score down low and give us a chance to win at the end was really the big part of that game.”