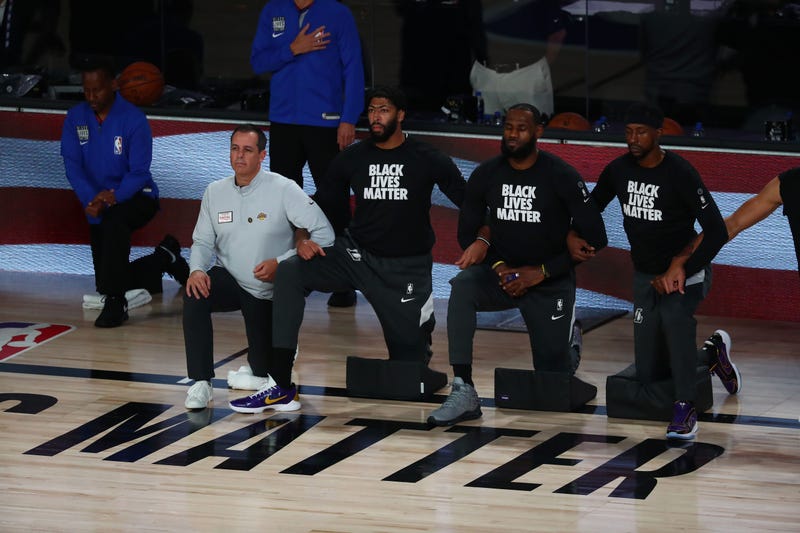 NBA players have decided to resume the 2019-20 playoffs after a brief boycott, but LeBron James reportedly voted to cancel the season.

Indeed, James, 35, is chasing his fourth NBA title, but when it comes to police brutality and systemic racism, he has simply had enough.

“His conscience was more important than money,” former NBA player and current SiriusXM Radio analyst Antonio Daniels said on The Zach Gelb Show. “That’s what it came down to. I get the [appeal of] championships. I get it. But LeBron’s got sons. LeBron has sons. When you have sons in this environment, it makes you view the world different. It makes you pray different when you have sons, when you have black boys that are growing up in this climate. I have a 2-year-old son, and I ask myself all the time, ‘When does it come a point where he turns from being cute to being a threat?’

“So yeah, championships are fantastic, but you also understand you have an opportunity to be a part of something bigger,” Daniels continued. “I’m not talking about your legacy on the floor. I’m talking about your legacy off the floor. When your conscience starts to take over and your heart starts to take over, basketball becomes minute. It becomes minute. It becomes secondary. Primary is changing what you have an opportunity to change so that your children – your children, my son, LeBron’s sons, your daughter – are not having this same conversation 20 or 30 years down the line.”

NBA legend Bill Russell, it is worth noting, led a boycott for the exact same reasons…in 1961. He and his Black teammates on the Boston Celtics did not play a game. Neither did their opponent’s Black players on the St. Louis Hawks.

The white players for both teams suited up and played anyway.

“Bill Russell and the Boston Celtics boycotted a game for this same exact reason 59 years ago,” Daniels said. “But yet, here we are today – 59 years later – and guys are boycotting games for the same exact reason. What are we doing in this country so 59 years from now as the NBA continues they’re not looking back and saying, ‘Man, Giannis Antetokounmpo and the Milwaukee Bucks boycotted a game versus the Orlando Magic. Now 59 years later, we’re here again.’ What can we do to make a change? What can we do to stop what is going on in the country so the conversations we’re having right now, our children don’t have to have in the future.”

Daniels, 45, was asked to reflect on his experiences as a Black man in America.

“I love what Charles Barkley said: it’s exhausting,” Daniels said. “I’m going back and forth with people on Twitter about what’s going on and talking to colleagues, and the moment that players chose not to play, you know what the response was? ‘This is my escape from reality.’ So now think about this. There are some of us that, because of the color of our skin, there is no escape from our reality. This, to me, comes down to three words. It comes down to sympathy, empathy and apathy. Which lane are you in? Sympathy is, ‘I feel so sorry for you guys.’ No, don’t feel sorry for us. I love who I am. I love my culture. My mother raised me to be a strong Black man. I don’t want sympathy. Apathy basically says, ‘It doesn’t impact me so I’m going to turn my back on it. If it doesn’t affect me, I don’t want anything to do with it.’

“We don’t want sympathy. We don’t need apathy. Empathy is what I ask for,” Daniels continued. “Empathy means seeing the world through my eyes, not calling everything a race card [or] pulling the race card. ‘Oh, you’re over-exaggerating.’ I’ve had guns pulled on me before by cops. I’ve been racially profiled before. When you walk out of that gym and that jersey comes off, you are a Black man in America. People act like just because you make a lot of money that that exempts you from everything else. . . . I want people to start viewing the world from eyes that don’t look like theirs because that would change your perspective on everything.”