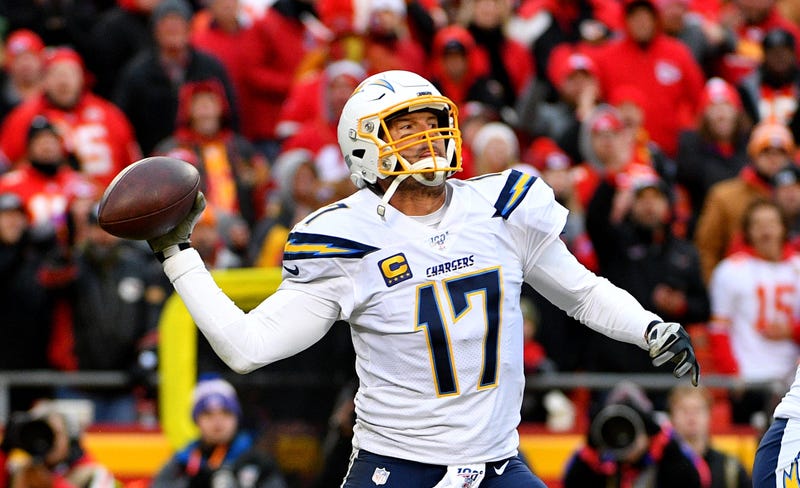 After 17 NFL seasons, Philip Rivers is calling it a career. The 39-year-old quarterback announced his retirement Wednesday, and already the debate about whether he is worthy of the Hall of Fame is in full force.

Rivers is an eight-time Pro Bowler, but he never won a Super Bowl. In fact, he played in just one conference championship game.

Former teammate Antonio Gates, however, does not believe that should disqualify Rivers from the Hall.

“Some people affiliate [the Hall of Fame] with a Super Bowl championship. I think that’s the wrong thing to do,” Gates said on The Zach Gelb Show. “For me, I like to affiliate it with a success from an individual standpoint. What did that person contribute to and how much [did] he contribute to the game of football over [his] career?”

Rivers ranks fifth in NFL history with 63,440 passing yards. The only players ahead of him? Tom Brady, Drew Brees, Peyton Manning and Brett Favre.

“When you put that in perspective, in anything you do if you finish in the top five in any sport, any position, to me, it’s self-explanatory in terms of what I feel with you being a first-ballot,” Gates said. “You’ve already proven to me that you are a top-five quarterback because your numbers speak to everybody fluently about what you can do and what you’ve done over the course of your career. I can’t imagine him not being a [first-ballot Hall of Famer].”

“He had a phenomenal career,” Gates said. “I just think he should be a first-ballot [Hall of Famer].”

Gates, 40, played for the Chargers from 2003 to 2018. Ironically, another former teammate of his, Drew Brees, could soon retire.

Had things unfolded a little differently, it’s possible that Brees could have spent his entire career with the Chargers.

“So many guys were making mistakes around [Drew] it forced us to draft a quarterback,” Gates said. “When we got [Philip], we knew he was a natural-born leader. Even when he wasn’t playing, he had this fiery way about him and it just had leadership written all over him. It was very obvious. That was a distinguishing factor about meeting Philip. You knew he was a leader from the day you met him.”

Rivers showed leadership – and toughness – when he played in the AFC Championship in January 2008 with a torn ACL. It was the only conference title game of his career. The Chargers lost to the undefeated Patriots, 21-12.

“When he played with that torn ACL, at that point, I knew – I knew – he would be our leader for years to come,” Gates said. “I knew it. To me, that’s still something we talk about to this day.”

At the same time, Gates isn’t surprised that Brees had the success he did in New Orleans.

“No, not at all,” Gates said. “Drew Brees was an unbelievable quarterback when he was in San Diego. He actually went to the Pro Bowl the year we drafted Philip, which was ironic that we had to make a decision. We franchised him two years in a row, and he ended up doing something to his shoulder against the Denver Broncos in 2005. He had to get shoulder surgery, and that probably was the biggest decision the organization had to make. You’re talking about two future Hall of Famers, two great quarterbacks, two great leaders – that is very hard. Which one do you keep? Which one do you let go? I think it worked out for both parties. Drew went on to have a great career, and so did Philip.”

“In my mind, we had championship moments,” Gates said. “We never won a championship, but when I think about the caliber of players that was on that team, our practices was like the Pro Bowl – and when I got to the Pro Bowl, the Pro Bowl was easier than our practices because I was going against Quentin Jammer and Antonio Cromartie and Shawne Merriman and Luis Castillo. It felt that way. Lorenzo Neal, LT [LaDainian Tomlinson], we had Darren Sproles – it’s just amazing that we didn’t win one.”

Gates took it a step further.

“Excuse me for saying this, but we’d probably be considered one of the biggest, most talented teams to have never won a Super Bowl,” Gates said. “I think about that Buffalo team with Andre Reed and Jim Kelly and Thurman Thomas and all [those] years they never won a Super Bowl. I think we are that team in that generation. That 10-year span from 2004 to 2014 – that generation, the 2000s – we were by far the most talented team in the league. It wasn’t even close.”

Click below to listen to Gates’ interview in its entirety, including his thoughts on Eli Manning’s Draft Day power play in 2004.