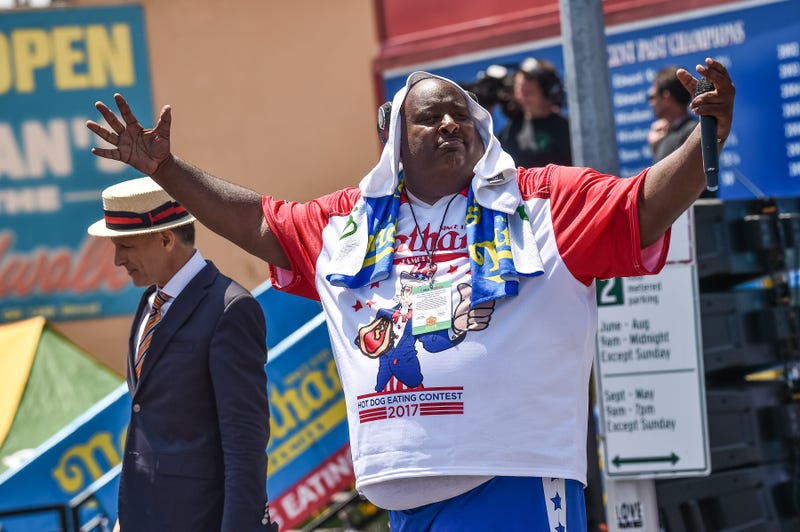 In April, Eric “Badlands” Booker dropped by The DA Show to preview the Major League Eating Quarantine Challenge and promised to “crush” the bologna round, which meant downing two pounds of deli meat.

Unfortunately, Booker didn’t fare as well as he had hoped during the event, which featured social-distancing, but he plans to do much better in the Nathan’s Hot Dog Eating Contest on July 4.

“I’m going to do much better than I did during the Quarantine Challenge,” Booker told Shaun Morash and Andrew Bogusch, who were filling in as hosts of The DA Show. “I’m definitely used to eating in that sort of sense now. There’s not going to be no bologna repeats. It’s going to be on on the Fourth. No worries.”

The event, which is typically held outdoors at Coney Island, will occur at a private indoor site at the Brooklyn beach.

Three states – New Jersey, Colorado and New Hampshire – have legalized betting on the event for the first time in history. One bet involves taking Joey Chestnut, who has won the competition 12 times, or the field. Bogusch is considering placing a bet on the field.

“Anything can happen,” Booker said. “Joey could have a bad day. In the Quarantine Challenge, he had a rough start but he prevailed at the end, so you never know. That’s the beauty of competitive eating. You never know what can go on at a given time. So yeah, feel free to place your bets. It’s all good.”

Chestnut won the event last year after downing 71 hot dogs and buns. He ate an event-record 74 in 2018.