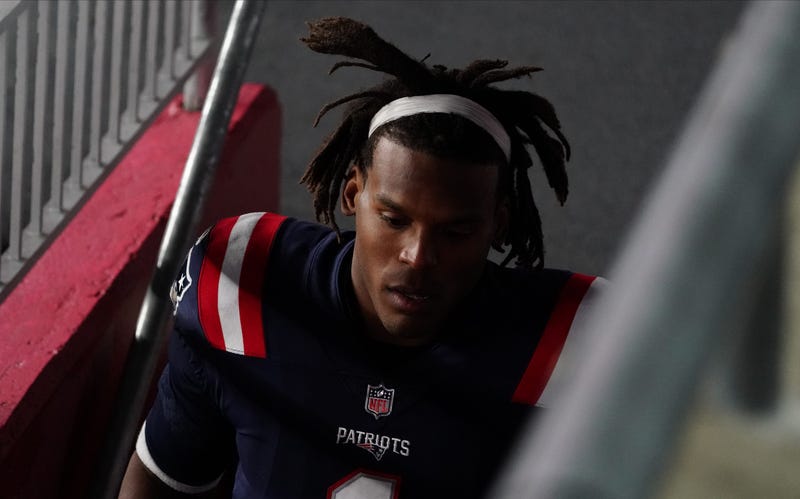 Things have gone from bad to worse for the New England Patriots (2-4), who have lost three straight games and are looking up at the Miami Dolphins (3-3) and Buffalo Bills (5-2) in the AFC East.

Why have the Patriots struggled so mightily this season?

“It’s their quarterback play, no question” Boston Globe senior NFL writer Ben Volin said on The DA Show. “It’s all about the offense right now. The defense isn’t great – they got gashed by San Francisco – but when the offense is going three-and-out every time, [it’s tough].”

“[They] can barely complete a pass, can barely convert a first down – and it all starts with Cam Newton,” he said. “Against Denver, we gave him a little bit of a pass. He didn’t have much practice the last two weeks, this is a guy that’s still new in the offense – so yeah, it’s understandable that [with] some time off, his fundamentals would slip, he maybe doesn’t see the field as well. But last week was terrible against San Francisco.”

Newton finished 9-of-15 for 98 yards and three interceptions against the Niners.

“He’s staring down receivers, he’s not seeing the field, he’s missing open guys, he’s hesitant, he’s not throwing with timing and anticipation – Cam Newton has been really the genesis of all their problems,” Volin said. “To me, it all starts with Cam Newton. Him getting COVID . . . really sent the Patriots into a tailspin, it messed up their schedule for the next two weeks, it took Newton out of the mix, and he noticeably has just been really off since he returned. So to me, it’s all about the quarterback play, and they just have not been getting good play from Cam Newton.”

Newton tried to put his best foot forward after the game, but it was a struggle.

“I think if there was one guy who could handle being the successor to Brady, it is Cam Newton,” Volin said. “He is just overflowing with confidence, he’s someone who’s been there and done that, he’s been to the Super Bowl, he’s won an MVP. It’s hard to have confidence when you get you butt kicked 33-6 and you get benched in the third quarter. He’s at least taking responsibility and after every game he says, ‘I played terribly, and it starts with me. I have to play better.’ It’s great that he’s taking responsibility for it, but at some point it becomes hollow. It’s like, ‘Okay, we get it, you need to play better, so time to start playing better now.’

There’s no short-term fix for New England, either, as Brian Hoyer and Jarrett Stidham have also been ineffective this season.

“The Patriots don’t have a great answer,” Volin said. “This is the lot they’ve given themselves this year. They didn’t really invest in the quarterback position, they let Brady go, they didn’t use a draft pick, they didn’t really sign anybody in free agency, and they just waited for the last man standing, and they got Cam Newton for minimum money. Maybe you get what you pay for.”