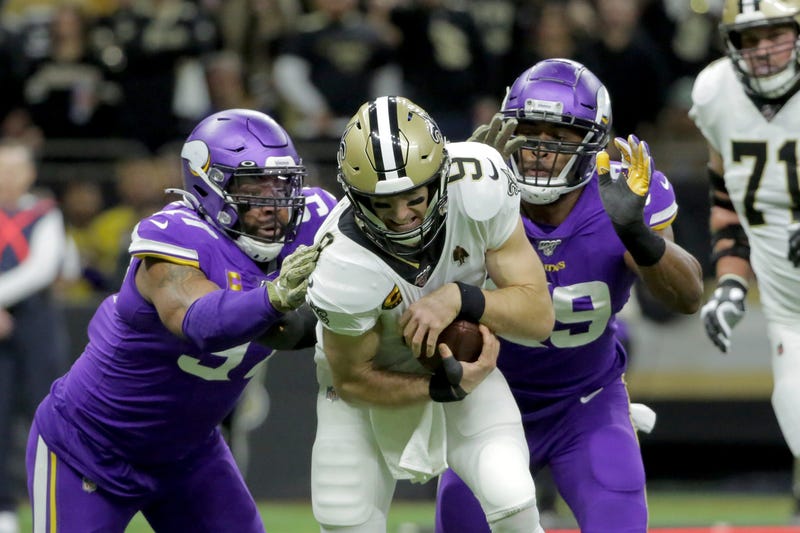 Drew Brees is one of the greatest quarterbacks of all time. He’s a Super Bowl champion, a Super Bowl MVP, and he’s thrown for more yards and touchdowns than anyone in NFL history.

But he’s starting to look a little old. That’s the way it seems through two games, anyway.

“This is what happens,” former NFL linebacker and Super Bowl champion Brady Poppinga said on Reiter Than You, “and every time I see it happen, it reminds me of the great Brett Favre. When Brett went to Minnesota, he tried to prove the Packers wrong, he had his chance, and he did. He beat us a couple of times in ’09. But what ended up happening is he retried, they talked him [into] un-retiring, he played, and then he eventually was like, ‘I can’t do this anymore.’ Everybody was like, ‘Why, man? You can still throw the ball, you’re still athletic – everything is still here.’ And he basically said, ‘I’m just tired of getting hit.’

And, as Poppinga pointed out, not all hits are created equal. When a quarterback gets hit, he gets hit.

“You can’t really brace yourself,” he said. “You’re a sitting duck. I don’t think people realize that. When you’re a quarterback, you’re literally trying to trust these offensive linemen to block [for] you. You have a blind spot where you cannot look at the rush. If you look at the rush, you’re going to be on the bench because you can’t play. That's happened to a lot of young guys. So think about it: you’re in the pocket, you got guys like me, or how I used to be – 6-3, 250, can run 4.6s – and back then we were going to split you in half with our forehead; now it’s with your shoulder. And you can’t even look at that guy. You got to read coverages. You got to make sure your receivers [are where they need to be] so you’re not turning the ball over.

“Over time, you get hit enough, you’re going to get sick of getting hit,” Poppinga continued. “Then all of a sudden, what happens? You start to rush a little in the pocket, you start to take a couple peaks, you let go of the ball a little bit sooner than you probably would have – it’s human nature.”

Brees, 41, finished 26-of-38 for 312 yards, one touchdown and one interception in a 34-24 loss to the Raiders on Monday Night Football. He threw just one pass more than 20 yards downfield.

“You’re not saying anything that’s derogatory,” Poppinga said. “You’re just telling the truth. Drew Brees is at that point where . . . he’s just getting tired of getting hit, and it’s negatively affected his play. That’s just what’s happened. That’s human nature.”

sports
Washington's cheerleaders learned from Twitter they were out of a job
sports
Trevor Lawrence isn't Chris Simms' top ranked quarterback in 2021 class
music
The Reel Buzz: Disney CEO says there’s no 'going back' to the old way of watching movies
sports
T.J. Hockenson says Matt Stafford is the best player he's ever been around: 'Everybody loved him'
news
¿Deben recibir dos dosis de la vacuna de COVID-19 las personas que ya tuvieron el virus?
news
8 podcasts to help you get through the last bit of winter