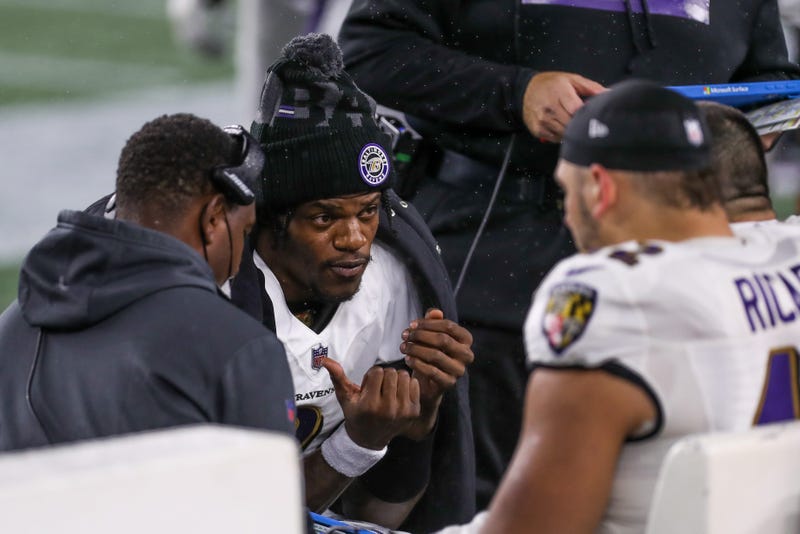 Lamar Jackson played his best game of the season Monday, leading the Baltimore Ravens to a 47-42 road win over the Cleveland Browns. Jackson scored three touchdowns, including two on the ground, to give Baltimore (8-5) a victory in a must-win game.

“Lamar Jackson was spectacular in a big spot,” NFL on CBS broadcaster Andrew Catalon said on The DA Show. “A lot of people question how he’s played in big games in his young career. Look at the playoffs. Look at Kansas City earlier this year. That was a big game on Monday night. They had to have it. You look at their schedule the rest of the way, they are in a great position to get in the playoffs. Lamar stepped up.”

So did Justin Tucker, who drilled the game-winning 55-yard field goal in the final seconds.

“He, to me, is the best kicker in NFL history,” Catalon said. “I think that’s a big part of this Baltimore team if they do get in the playoffs.”

The Ravens are neck-and-neck with the Miami Dolphins (8-5) for the final playoff spot in the AFC. The Dolphins hold a tiebreaker over Baltimore based on winning percentage in conference games.

Still, no team should want to face Jackson and the Ravens, especially after their performance Monday.

“I believe [missing a game due to COVID-19] gave him a different perspective,” Catalon said, referring to the Ravens’ Week 12 loss to the Steelers. “That’s what he said. It gave him a chance to sit back and realize what football is all about. Everything you read and hear since his return after missing that one game is that he’s a different guy. He’s back to the way he was. He’s having fun again. He realizes that football was taken away and now he’s got this great opportunity to lead this team. I think you saw that. The way he was running around the field when he wasn’t having the cramps and the way that he was hugging [John] Harbaugh, dancing up and down, that’s the Lamar Jackson that I think that we saw in his rookie year, in his second year. We didn’t see a lot of that this season, but maybe being away from the game has put things in perspective for him.”

While the Ravens trail the Browns (9-4) and Steelers (11-2) in the division, the Ravens might be the AFC North team with the best chance to reach the Super Bowl.

“I think you can make that case,” Catalon said. “It’s going to be so weird with home-field advantage this year. First of all, only one team gets [a bye] in each conference, and beyond that, there really is no home-field advantage this season. I’m in these stadiums every week, and it’s so different being in the stadium compared to what everyone is seeing and hearing with the fake crowd sound and whatnot. So yes, you want to sleep in your own bed. You feel better in your home stadium. But you’re going to tell me a 7-seed or a 6-seed can’t go to Kansas City or Pittsburgh and win a game because they’re on the road? I don’t see that this year, and the numbers kind of play that out. The road teams are having a lot of success this season. There’s no crowd noise to worry about.

“So yeah, Baltimore, even if they do get in as a 7-seed, I think that means less compared to previous years being like, ‘Ah, they can’t go on the road three straight games and win,’” Catalon continued. “Well, I think you can do that this year because of the situation we’re in. I think it’s wide open once you get in. These windows are going to be wide open if you get in there, and you got to take advantage if you do.”

The Ravens lead the league in rushing offense and rank fifth in scoring defense, allowing 21.0 points per game.

“With the way Lamar ran on Monday night, you throw in Mark Andrews, a very dangerous tight end – we saw it. They scored 47 points,” Catalon said. “This could be a dangerous team that I don’t think a lot of AFC teams would want to see in the playoffs.”