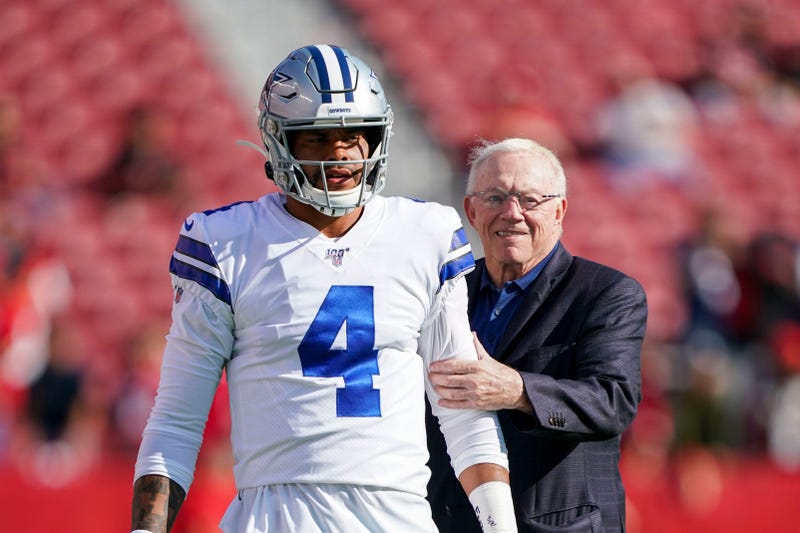 The Dallas Cowboys have been unable to sign Dak Prescott to a long-term contract, but Cowboys legend and Super Bowl champion Drew Pearson believes it will happen.

“They will get this deal signed, it will be a long-term contract, and Dak Prescott will be the Cowboys quarterback for the future,” Pearson said on The Zach Gelb Show. “Jerry Jones ain’t going to waste this opportunity. I know he brought in Andy Dalton, and that gives Jerry Jones a little measure of security there for that position if things don’t work out, but man, don’t do that to this football team at this point. Dak Prescott is the leader, the players respect him, the coaches respect him, this town, everybody respects him. So don’t mess this up, Jerry. I think he’ll get the deal done.”

Either way, he’s going to get paid.

“I view him as one of the best quarterbacks in the National Football League,” Pearson said. “His production speaks for itself in the four years he’s been there, he’s won a playoff game, he’s been in the playoffs, he’s been a Pro Bowl quarterback, he’s done everything that we asked him to do, and he had a great season last year.”

Prescott completed 65.1 percent of his passes for 4,902 yards, 30 touchdowns and 11 interceptions. He also ran for 277 yards and three scores.

The Cowboys started 3-0 last year but finished 8-8 and missed the playoffs.

“We couldn’t get over the hump in that last game to get in the playoffs, but it shouldn’t have come down to that for this football team to have one game decide whether you go to the playoffs or not,” Pearson said. “The reason we were 8-8 and lost eight games wasn’t Dak’s fault. He did a lot of things to get the eight wins that we did have. So I like him.”

“We’re both scratching our hands and can’t understand the criticism that’s still levied upon Dak, the doubt that’s still levied upon Dak,” Pearson said. “I told Dak, ‘You could throw to me anytime.’ He’s accurate. He did all this despite his receivers leading the league in dropped passes. They dropped over 30 passes last season. I never dropped 30 passes in my life, including Pop Warner football right on through the pros. He had all those things he did well despite some of the situations with the defense and a new coordinator, again learning [new] terminology under a new coordinator and quarterback coach. So, man, I don’t see what else he can do other than take us to a championship, a Super Bowl, and winning it. Maybe then he’ll get the praise and recognition that he deserves.”

Pearson was asked if Prescott is worth $35 million – or more – per year.

“I don’t think any of those guys are worth that kind of money, okay?” Pearson said, laughing. “What I did, for the little money that we did it [for] back in the day, you look at these numbers and you scratch your head again and say, ‘Wow, I don’t think anybody deserves that.’ But that’s the market. Don’t be mad at him. Don’t blame him for setting the market. These other owners and GMs signing quarterbacks like [Carson] Wentz and [Jared] Goff and Aaron Rodgers and [Matthew] Stafford and people like that – they set the market. That’s just playing the market.”