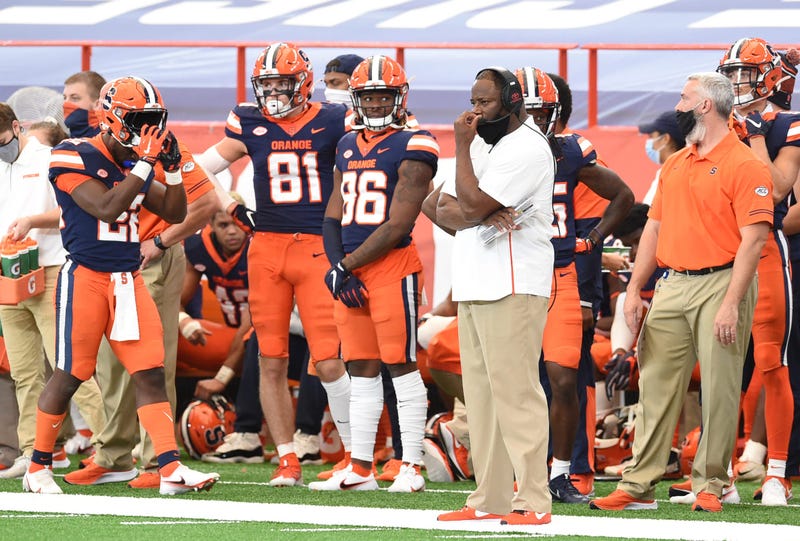 Part of the unsightly number next to Syracuse this week is because of the opponent. Clemson's superiority over the ACC in recent years is devastating. The Tigers have won the conference five straight seasons, and in the last three the title game has been a laugher. The scores are comical: 38-3, 42-10, 62-17. Clemson takes the best league opponents and bats them around like a real tiger does rabbits.

This weekend the football Tigers are 46-point favorites over the Orange. Forty-six. That is a combination of Clemson's weekly waxing of its opposition, and SU’s latest embarrassment. The Orange are only a week removed from allowing Liberty to run all over them at the Carrier Dome, 38-21. The Flames have only been at the FBS level for 15 minutes, yet they gained 520 yards last week. Liberty had nearly 300 yards rushing at halftime. They bullied and pushed the Orange around the trenches. SU is without its starting QB (Tommy DeVito) and best defensive player (Andre Cisco) because of injuries. The most eye-popping realization of last week was that SU doesn't have Liberty's talent.

In today's hyper-speed news cycle, it may seem like ancient history, but the Orange aren't that far removed from being one of the best programs in the country. Within the last 20 years, SU produced Donovan McNabb, Marvin Harrison and Dwight Freeney. One of those was a franchise cornerstone quarterback, one wears a gold jacket in Canton, and the third eventually will. They won the Big East four times in 10 years, and went to a Sugar, Peach, Orange and two Fiesta Bowls from '87-'98. Today's truth, however, is Liberty has more talent, and Clemson is nearly 50 points better.

How did we get here? Well, Greg Robinson was the arsonist. There is no more culpable figure in the demise of the Orange. The closest experience Orange fans have to getting punished at the Dome by Liberty is September 6, 2008. On that fateful day, the misguided hope of Robinson was smashed to smithereens. An inglorious 42-28 loss to Akron was the fatal blow to Groobers and his disastrous reign. Under him, the program became a punchline. It recruited poorly, it was out-coached every week, and previously inferior teams showed no fear in playing SU. The Dome grew more sparse as it became more obvious just how overmatched Robinson was. He was fired as a public flogging for the humiliating end to the Chiefs '03 campaign. His defense couldn't force a punt in a playoff loss to Peyton Manning. He never deserved a head-coaching job.

The loss to Akron set in motion a season that would be Robinson’s last. It was Akron’s second ever win over a Power 5 opponent. It declared in neon lights how unprepared Robinson was for the job. It spoke to the cratering recruiting. It showed SU fans just how precipitous the drop-off was.

The program has never completely rebounded. Robinson was supposed to be a bright-minded West Coast coach to drag Syracuse into the modern age. The final years of Paul Pasqualoni in the early '00s felt staid and unambitious. But Robinson lit fire to the Syracuse football brand, and 15 years later it's still smoldering. Doug Marrone left for the NFL too soon. Scott Shafer was never an inspired choice. Dino Babers is charismatic and optimistic, but the results are too hard to find.

The writing was on the wall last week as Vegas installed Liberty as favorites, and Yahoo Sports writer Pete Thamel predicted before the game a Flames blowout. Not all of it is on Babers. Multiple important SU players opted out because of COVID-19. The Dome had no fans in attendance. SU's two most important players were injured. Liberty has an SEC-seasoned coach in Hugh Freeze.

The problem is mediocrity is now the norm, not the exception. Since the last great season under Pasqualoni in '01, SU has just one 10-win campaign. In those two decades, the Orange have been to only five bowl games. None of them top tier. It's been two Pinstripe Bowls, a Champs Sports Bowl, a Texas Bowl and a Camping World Bowl. In that span, there's only been four times SU has finished with a winning record. It's hard not to wonder if the move to the ACC simply leaves the school in permanent purgatory like other whipping boys of the Power 5: Vandy, Wake Forest, Oregon State, Indiana, Rutgers. But those other schools haven't produced the lineage of Pro Football Hall of Famers (Jim Brown, John Mackey, Larry Csonka, Art Monk, Floyd Little, Harrison). Syracuse is unique because it wasn't long ago that the program was one of the elite.

As Thamel laid out Saturday night, Babers won’t be fired. He’s owed close to $17M as a buyout after this season. There’s no way SU ponies that up to get rid of a coach, only to also pay the next one. Perhaps it’s the darkness before the light. The Akron loss birthed the move to Marrone, and immediately the program began climbing back. Maybe this humiliation will force Babers to readdress recruiting. Maybe the school will invest more in talent scouting and support staff. Maybe there will be a harsh glare John Wildhack and Babers use to find new solutions. Because losing to Liberty is one of the low points in SU football history. Now we see what SU does with it.

How does a program fall this far this fast? It takes a fire, and then 15 years of letting it burn.

Damon Amendolara, known by his fans as D.A., hosts “The D.A. Show,” from 6:00AM-10:00AM, ET, across the country on the nation’s largest 24/7 major-market radio network. “The D.A. Show” is known for its unique perspective on sports, tongue-in-cheek sense of humor, colorful listener interaction, and candid interviews with athletes and coaches. Amendolara also appears regularly on NFL Network as part of the “NFL Top 10” documentary film series, CBS television and SNY TV. He is a Syracuse University grad and native of Warwick, N.Y.