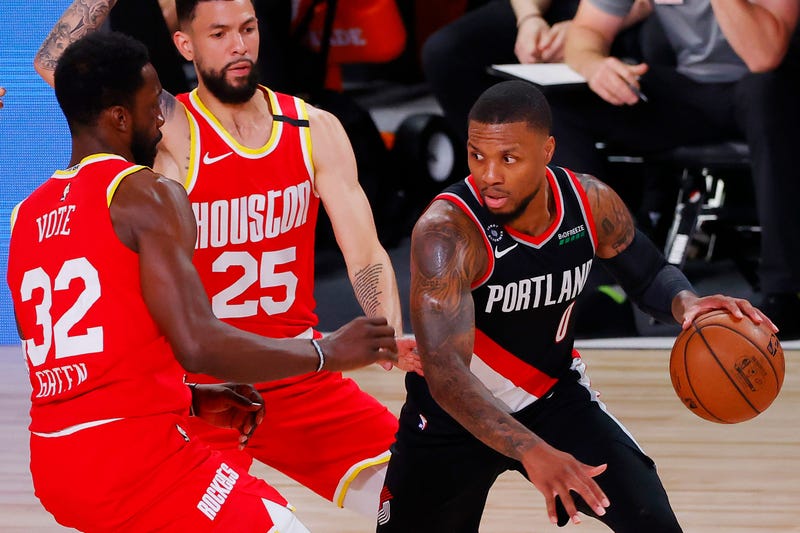 Here are the locks for the Top 10 players in the NBA: LeBron, Durant, Kawhi, Giannis, Steph, Harden, AD and Luka. Apologies to Joel Embiid; he's just too inconsistent and too injury-prone. The talent is obviously there, but he's not a LOCK.

Blazers guard Damian Lillard, however, is making quite a case for himself.

In Sunday’s win over the 76ers, Lillard scored 51 points on over 57 percent shooting. He also had the game-high in assists. This was Dame’s FIFTH game of scoring at least 50 points this season. That is as many 50-point games as Giannis, Anthony Davis, Trae Young, Bradley Beal, LeBron, Luka, Kawhi, Joel Embiid and Russell Westbrook have COMBINED this season. Keep in mind Bradley Beal averaged 31 PPG this season, good enough for second in PPG. Larry Bird had FOUR 50 point games in his regular-season CAREER for crying out loud. Again, Dame has FIVE in this regular season alone. Let that sink in!

Dame’s FIVE 50-point games this season are as many 50-point games as he has had in his first seven seasons COMBINED, from 2012-19. Those seven seasons are quite impressive, by the way. In more than half of those NBA campaigns, he was All-NBA, including an All-NBA first-team selection in 2017-18. His scoring ability, along with his improved all-around game, have elevated him to superstar status at this point. It is reflected in the Blazers' recent winning ways!

The Blazers are 4-2 so far in the Orlando Bubble. The Los Angeles Lakers, the best team record-wise in the West this season, are 2-4 in the bubble. Experts will say, “But what are the Lakers playing for? They already locked up the No. 1 seed in the West!” What about the two-through-eight seeds in the West? None of these teams have any specific seeds locked up. Here are their records in the bubble so far: the Clippers are 3-3, the Nuggets are 3-2, the Thunder are 3-2, the Rockets are 4-1, the Jazz are 2-4, the Mavs are 2-3, and the Grizzlies are 1-5. Obviously the only team with a better BUBBLE record in the West seeded higher than the Blazers are the Rockets at 4-1. It’s worth noting behind Dame’s great all-around performance against the Rockets, the Blazers are the only team to beat the Rockets in the bubble.

Remember, this was a Blazers team that began the season 5-12 and were written off by so many just in terms of MAKING the playoffs. They are now half a game out of the eighth spot in the West, and it seems inevitable based on the Grizzlies fading due to injuries and youth that the Blazers will end up with the eighth seed by the time the seeding games are over.

The Six Games Dame Has Played So Far In the Bubble

Game 3: Win versus Rockets: 21 points, 9 boards and 8 Assists in win. This gave the Rockets their only loss in the bubble. At a generous 6’2, Dame had more rebounds than any other Rockets player.

Game 6: Win versus 76ers. Not just game-high 51 points, but the GAME-HIGH IN ASSISTS AS WELL.

Even in losses, the Blazers are right in it until the very end. An All-Star looks really good as an individual; a superstar makes everyone else look good – and as a result of that, the team wins. Dame has put this Blazers team on his back and has scored at historically great levels. He has sprinkled in incredible assist and rebounding efforts to go with it. Just look at what he has done in comparison to his peers in scoring. Look at the other facets of the game he has been great in. Can ten other NBA players do that? I highly doubt it. Dame is very worthy of being in the Top 10. Can't wait to see how far this top-10 player, Melo, and the Blazers go in the Orlando Bubble. So far, so good – top-10 good!