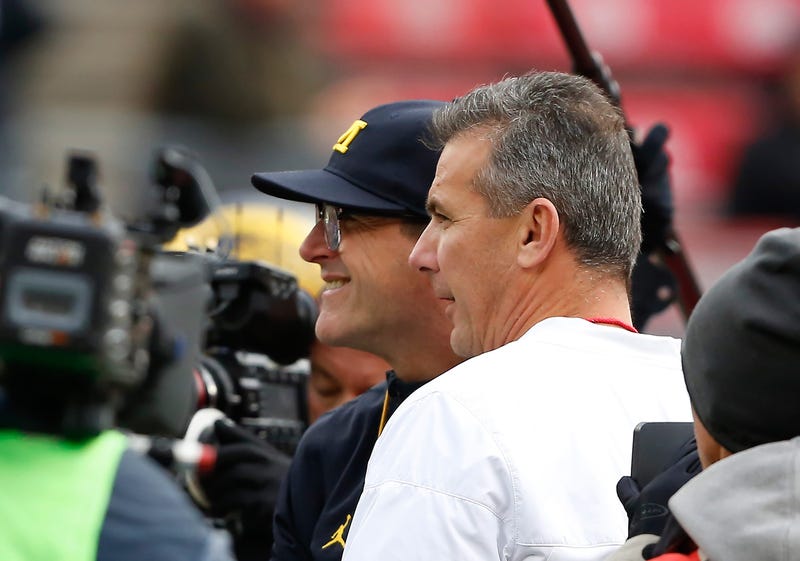 With Jim Harbaugh heading for another disappointing season in Ann Arbor, Michigan must decide what to do with its football program. Harbaugh is 48-20 at Michigan but 10-8 over his last 18 games. He’s also struggled mightily against ranked teams and is 0-5 against Ohio State.

“[If] you look at his overall record, you say, ‘He’s gotten Michigan back to a level of respectability,’ but if you look inside that record, he’s 11-15 against Top 25 teams and 2-12 against Top 10 teams,” Zach Gelb explained on The Zach Gelb Show. “So I was thinking long and hard about this on Sunday after I saw Michigan go down once again on Saturday, and I’m trying to contemplate who is the guy that Michigan should target?”

Gelb kept coming back to one name.

“You’re going to say, ‘Zach, it’s ridiculous. Zach, it’s absurd,’” Gelb said. “I will embrace it. It is ridiculous. It is absurd. I fully acknowledge that it won’t happen. But if I’m Michigan, this would be my dream. You call up Ohio State, you talk to Urban Meyer – who’s in some role in the athletic department somewhere – and you see if he’s at least interested.”

Meyer, 56, is an Ohio native who grew up revering Ohio State. He also went 83-9 in seven seasons with the Buckeyes and won a national title in 2014.

“I get it. Urban Meyer is Mr. Ohio. He’s Mr. Ohio State,” Gelb said. “That guy still wants to coach football, and it’s not happening at Ohio State because they have Ryan Day. But does anyone believe that Urban Meyer has actually coached his final game? I don’t. Urban Meyer wanted to go to USC; the president of USC didn’t want him. He would also love to go to Notre Dame; Brian Kelly isn’t going anywhere.”

Kelly, who guided Notre Dame to a national championship appearance in 2012 and to the College Football Playoff in 2018, has the Irish (7-0) ranked No. 2 in the country this season. While he figures to stay in South Bend for quite a while, you cannot say the same about Harbaugh in Ann Arbor, in part because there’s only one year left on his contract.

“I think Harbaugh is going to move on from Michigan because you don’t want to get fired from your school and you don’t want to put them in an ugly situation,” Gelb said. “Is it embarrassing to leave without beating Ohio State? 100 hundred percent. It is embarrassing. If I’m him, though, I would go take an NFL job. See if the Jets want you. See if the Chargers, if they move on from Anthony Lynn, would want you. You’re either coaching Trevor Lawrence with the Jets, or you’re going to end up coaching Justin Herbert with the Chargers. Go do that. Go to a place where it looked like you had the possibility to be great – because at Michigan, you’re going to keep on being eight, nine, ten wins, and keep on disappointing.”

Meyer to Michigan, though, would send shockwaves through the Big Ten – and all of college football.

“It would be a sports talk radio show host’s dream,” Gelb said. “And if I’m Urban Meyer, here’s a reason why I would take it. Your legacy is already great. You won two national championships at Florida. You won a national championship at Ohio State. Can you imagine if you turn heel and you say bleep-you to Ohio State, you go to Michigan, and then you end up owning a school? You owned Michigan when you coached against them; then you could literally own Michigan in a way where people would genuflect to you and you could beat up on your old school in Ohio State. If he could get past those relationships, it would be gold. It would add so much flavor and so much fire and so much life to this rivalry.