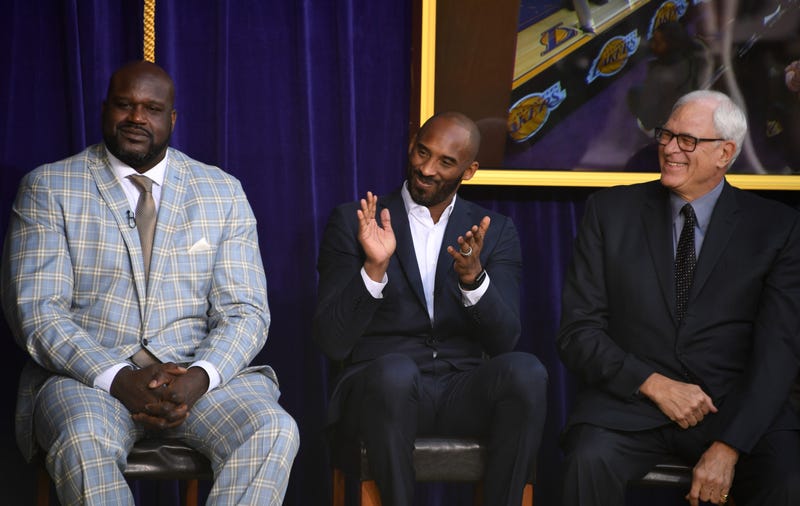 That trio – Kobe Bryant, Shaquille O’Neal and Phil Jackson – won three straight NBA titles together, but there was plenty of drama before, during, and after those rings. In fact, the drama started during Bryant’s rookie season in 1996.

“When he started playing, he was like a bad Michael Jordan tribute band,” Pearlman said. “He was doing all the mannerisms and all the crazy shots, but he wouldn’t find the open man, he wouldn’t pass, he didn’t play NBA defense, and Shaq gave him a nickname early on.”

“It was not a friendly [nickname],” Pearlman said. “He just didn’t really understand this guy coming along with this level of confidence at 18 years old.”

The Lakers, however, found success for many reasons. One, they had two of the best players in the game; and two, they surrounded O'Neal and Bryant with savvy veterans and great locker room guys – guys like Rick Fox, Robert Horry, John Salley, Ron Harper and J.R. Reid.

“Phil Jackson was very hands-off, and those guys were really mature,” Pearlman said. “Kobe was a tough nut to crack, and I don’t think anyone ever thought they fully got to him.”

One day, then-Lakers general manager Jerry West asked Reid to work with Bryant and try to get him to be part of the team more.

One night, O’Neal took the entire team out to dinner – a fancy seafood restaurant on the road. Bryant was invited and opted not to go. Sort of.

“A half hour later, they’re all at dinner and he shows up at the restaurant,” Pearlman said of Bryant. “Gets a table for one with a book.”

“He just was a different kind of guy,” Pearlman said, laughing.

O’Neal, meanwhile, could also be different – and difficult. Brandon Tierney, in fact, believes O’Neal underachieved in his career. He never fixed his greatest weakness – free-throw shooting – and he was rarely in great shape. That lack of professionalism, Tierney says, likely cost the Lakers some rings.

Pearlman, though, doesn’t see it that way.

“I could not disagree with you more,” he said. “It’s just a disagreement so I’m not saying you’re wrong. The free-throw shooting is a very fair complaint, and it’s something that really bothered Kobe Bryant. He goes, ‘Why isn’t this guy working on it?’ Because he really didn’t work on it that hard. . . . But I feel like part of the myth that Shaq was quote-unquote not a hard worker came because he was playing next to maybe the hardest worker we’ve ever seen. The thing that guys will tell you, Shaq would spend a season getting just the absolute snot kicked out of him . . . and he would be decimated. People would say his body by the end of a season was just battered.

“So, season’s over, he’s back home in Orlando, he’s in a pool, he’s smoking a cigar, he’s relaxing – he’s doing what you’re kind of supposed to do,” Pearlman continued. “Kobe could afford to be in the gym nonstop No. 1, because it was how he worked, and No. 2, he just didn’t have the physical battery that Shaq had.”

That said, O’Neal’s offseason regimen, or lack thereof, may have caught up with him later in his career.

“Toward the end, Shaq probably could have had greater longevity if he had worked harder to stay in shape,” Pearlman said. “I talked to his personal trainer heading into the '03-04 season and he was like, ‘It was really hard to get Shaq to want to run or lift weights. If we wanted to get him to work out, we had to find creative ways, like get him to play flag football. It was tough.’ But I do think in his prime he was a really hard worker. He really was. He just had the crap kicked out of him day after day.”