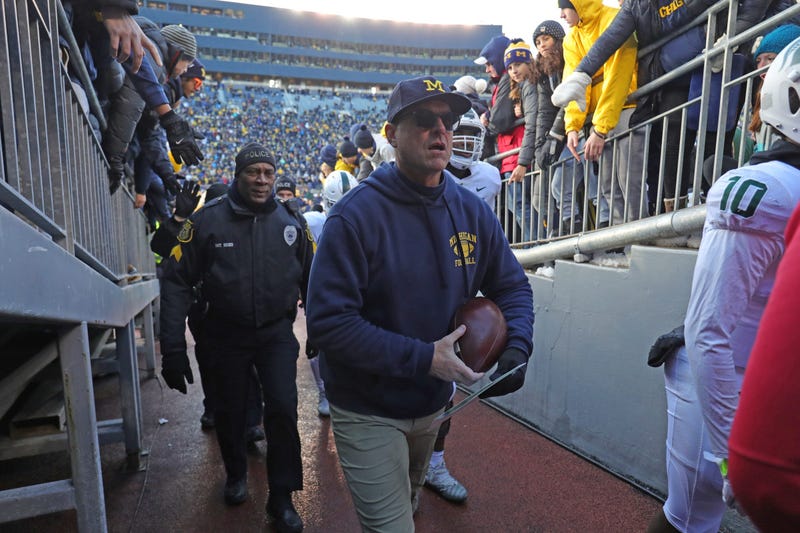 And, after dominating Minnesota 49-24 in its season-opener, Michigan has dropped back-to-back games to Michigan State and No. 10 Indiana.

“If your team isn’t disciplined, can’t not commit the stupid penalties pre- and post-snap, can’t be disciplined in your play, can’t go out there with the dudes you have – you’ve recruited well – and just outplay someone else, especially an Indiana, [which is a] non-branded program, I’m not a Harbaugh fan as a coach and personally,” Super Bowl champion and college football analyst Kevin Carter told Tiki & Tierney. “I don’t think that [he's] really buying [himself] any points with the Michigan faithful.”

It doesn’t help that Harbaugh is 0-5 against Ohio State and 1-4 in bowl games. He won 10 games in three of his first five seasons, but the big wins – the high-profile wins – have proved elusive.

“I don’t think he works well within the confines of college football,” Carter said. “He did at Stanford. He had success. But look, we can also [talk] football-IQ knowledge. That’s a trend. He basically was in a division where he could employ the use of very talented tight ends and stretch out the gaps and give you more gaps to defend, and you put a guy like [Toby Gerhart] or Christian McCaffrey back there and you have someone that’s talented and you can change the complexity of the game and control the line of scrimmage. He was able to play that kind of ball in a pass-happy conference. You bring that type of play to a bigger conference, and it didn’t work so well.”

Harbaugh has also been unable to develop a difference-maker at quarterback. From Jake Rudock to Wilton Speight to Shea Patterson, the Wolverines have gotten pedestrian production from under center.

“His offense has been ever-evolving, trying to get that playmaker at the quarterback position, trying to get that Tebow – whoever you can have as a signal-caller,” Carter said. “And unfortunately, he doesn’t work well with quarterbacks. Name me one quarterback that he’s developed, other than Andrew Luck, that he’s been successful with. All these guys, the Shea Pattersons – now Joe Milton is at the helm, and things aren’t working out for him.

“I just don’t see the success where you label this guy a guru and give him the keys to a Power Five juggernaut, a branded program like a Michigan,” Carter continued. “He’s not Urban Meyer. He’s not one of these coaches. So yeah, I think they should move on. I don’t think that Michigan is satisfied with the job that he’s done overall.”