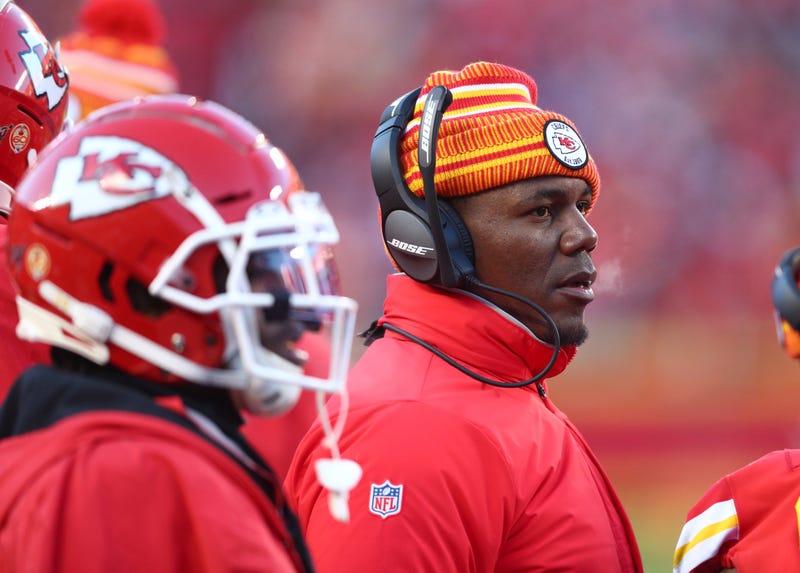 Eric Bieniemy helped the Kansas City Chiefs to their second straight Super Bowl on Sunday, as the Chiefs beat the Buffalo Bills, 38-24, in the AFC Championship.

It remains to be seen if Bieniemy will become an NFL head coach this offseason or in the years to come, but it seems he’s more than deserving of an opportunity.

“He’s an old-school football coach,” former Chiefs All-Pro linebacker Derrick Johnson said on The Zach Gelb Show. “He’s not an old guy, but his mentality is very cutthroat and hard and [a] grinding type of mentality. [He] made a track guy like Jamaal Charles so fierce on Sundays when it comes to running between the tackles. You talk about a great mind, a great offensive mind, just a great character guy – all the things that you want in a head football coach or any kind of coach, Eric Bieniemy is an example of that.”

Johnson, who played for the Chiefs from 2005 to 2017, said he’s “very surprised” that Bieniemy has not gotten a head-coaching opportunity.

“If you look under Andy Reid’s tree, it’s a pretty good line of coaches that have had a lot of success,” he said. “Eric Bieniemy wants to be a head coach. He’s put that out there. Of course he wants the right job; he doesn’t want any job. Someone will pick him up. You see what the Chiefs have done the last few years. If you think it’s all Andy Reid, then you’re not doing your homework.”

Johnson was asked if race has played a factor in Bieniemy’s lack of opportunities.

“You want to say no, but we all know that there is a race factor in it,” Johnson said. “A lot of black . . . coaches aren’t getting hired or aren’t getting that opportunity. Eric Bieniemy is a great example. . . . People need him to be a head coach because he can change young people’s lives, he can change an organization, and I hope to God that he’ll get picked up this year.”

As of now, the Houston Texans own the last head-coaching vacancy.

“Right now, it just doesn’t look good for the Texans, especially with the quarterback situation,” Johnson said. “But maybe if they get EB, maybe he can save Deshaun Watson. Wherever Eric Bieniemy goes, everybody is going to be like, ‘Man, we got a gem.’”