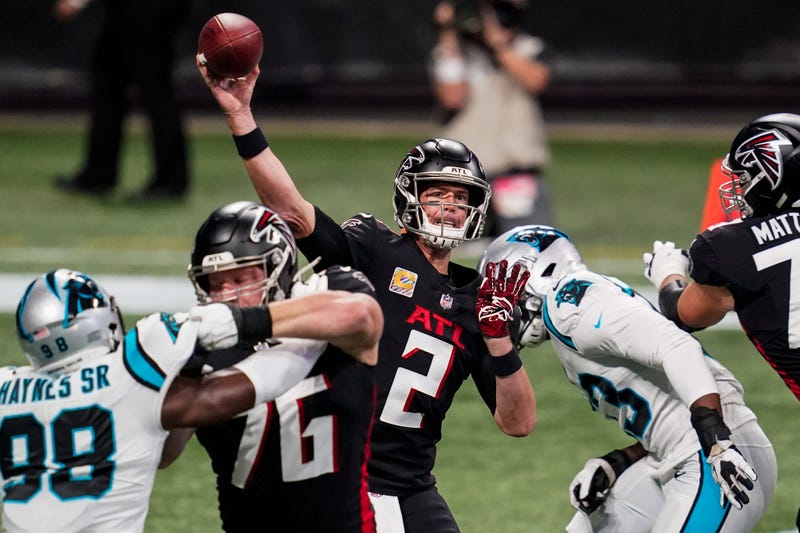 Falcons quarterback Matt Ryan wasn’t spectacular against the Carolina Panthers on Thursday. He threw for 281 yards, took two sacks, threw an interception and failed to throw for a passing touchdown for the third time this season.

That got JR SportBrief thinking. For as bad as the Falcons have been this season, for as disappointing as they’ve been the last couple of seasons, Ryan has never been the problem.

“If you look at everything this man has done since 2008, [he has] the most passing yards for the first 10 years of anybody’s career, the fact that the guy really doesn’t ever miss a game, the fact that he’s ninth in passing yards, the fact that he’s 11th in touchdowns, his longevity, his accomplishments, his MVP – what has Matt Ryan not done? Just win a Super Bowl?” JR asked. “I’m not saying, ‘Here he is, one of the greatest.’ But what I can tell you about Matt Ryan is that when you draft a quarterback [third overall in] 2008, he has done and he has gone above and beyond what you would expect and what you want. He’s put you in a position to win when you’re out on that field. What more can you ask for?”

How many franchises would love to have a quarterback like Ryan? You can probably name three off the top of your head: Bears. Dolphins. Jets.

“Don’t look a quarterback in the face and take him for granted,” JR said. “In the case of Matt Ryan, I know you want to get rid of him, and the time probably is ripe for Matt Ryan to be gone. By the time the Falcons are competitive again, Matt Ryan is going to be old and he’ll probably be somewhere else. Maybe he’ll be a backup somewhere. But when you look at Matt Ryan and his career, what he’s accomplished, how reliable he is . . . he’s been out there since 2008, and for the most part, he’s given you a chance to win. Ain’t nobody perfect. He’s not perfect. He’s not Pat Mahomes. He’s not Lamar Jackson. But for what he’s done in his career, he’s on a Hall of Fame trajectory.”

Ryan, 35, has led the Falcons to three NFC South titles, six playoff appearances, two NFC Championship games and one Super Bowl appearance. Almost every NFL franchise – and fan base – would take that career from their first-round quarterback.

“His time in Atlanta will eventually be done,” JR said. “All that money they’re paying him pretty much stops them from doing it right now. But sometimes you don’t know what you got until it’s gone. And [for] Matt Ryan, being an Atlanta Falcon and what he’s done over the course of his career, I think he deserves a little bit more love. I think Matt Ryan, for who he is – not who you want to compare him to – is underappreciated.”