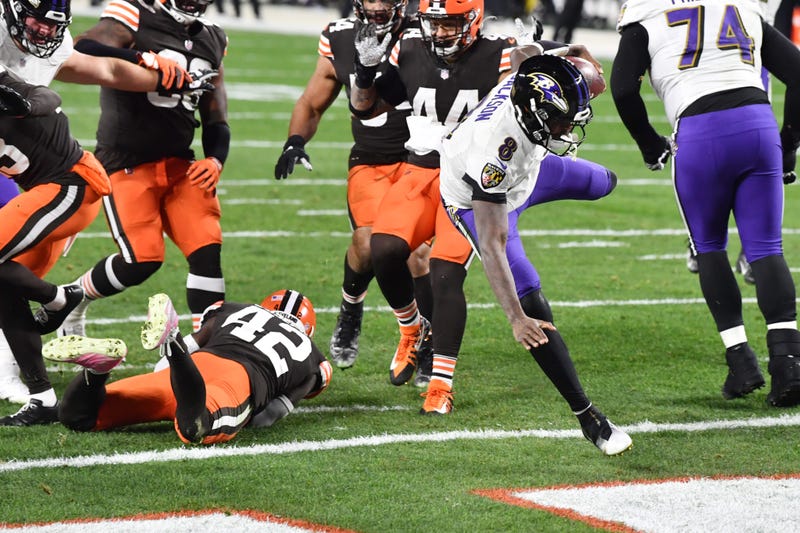 The Baltimore Ravens won perhaps the most exciting game of the season Monday, beating the Browns 47-42 in Cleveland thanks to some late-game heroics from Lamar Jackson.

The reigning MVP left the game with cramps in the second half but re-entered with the Ravens trailing 35-34 and facing a 4th-and-5 from Cleveland’s 44-yard line. Jackson rolled right and found a wide-open Marquise Brown streaking down the middle of the field for the go-ahead touchdown.

“Oh my gosh, I still can’t believe half the things that happened in that game,” cleveland.com Browns writer Mary Kay Cabot said on After Hours with Amy Lawrence. “I love the way Baker described Lamar bounding out of the locker room for that 4th-and-5 [play], it was like a scene in a movie. And it really was. It was exactly that. You almost couldn’t believe it.”

Jackson had torched the Browns (9-4) with his legs earlier in the game, rushing for over 100 yards and two touchdowns midway through the third quarter. But his arm won the game for Baltimore (8-5).

“All of a sudden I see him come trotting out of the locker room, and I was like, ‘Wait a minute? Is this happening? Is he going to do this?’” Cabot said. “Not only does he step into the game, but on the very first play, he throws a 44-yard touchdown pass. You cannot make this up. It was just an incredible, incredible game. Unfortunately for the Browns, it didn’t go their way. But I still think they showed a lot of grit and a lot of heart, and boy, was that a game.”

After Jackson’s dramatic return, Mayfield and the Browns went 75 yards in four plays to tie the game at 42-42. Jackson, however, had just enough time to get the Ravens in field goal range. Justin Tucker took it from there, drilling a 55-yarder to win the game.

The Browns entered Monday Night Football riding a four-game winning streak. They will look to rebound on the road against the Giants (5-8) on Sunday.

“This team is very, very focused on winning,” Cabot said. “They do not take any consolation in any kind of a moral victory. That is not what they’re about. They were focused on the fact that they have to put this one behind them, correct their mistakes and move on. They are very business-like in that way.”

While the Browns struggled to corral Jackson for much of the night, Mayfield kept Cleveland in the game. He finished 28-of-47 for 343 yards, two touchdowns and one interception. He also ran for 23 yards and a score.

“I think the key is that he’s getting more and more comfortable in Kevin Stefanski’s offense,” Cabot said. “They are running things off of play-action, and now Baker has just kind of got it down. He’s got his confidence in this offense, and they’re calling things for him that he feels good about. They’re [calling] the keepers, they’re rolling him out a lot, and they’re just kind of working off play-action, so it’s all starting to come together. Yo can see his confidence is growing by the week.”