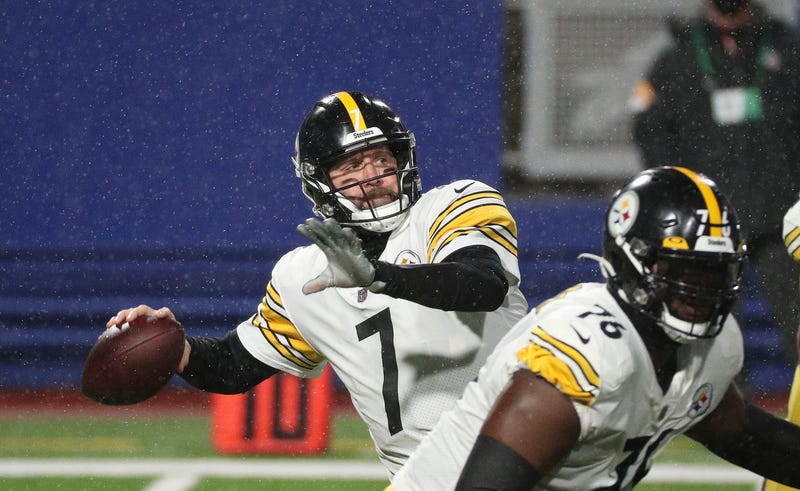 After starting the season 11-0, the Pittsburgh Steelers have lost three straight games, including a puzzling 27-17 loss to the Cincinnati Bengals on Monday Night Football.

Even worse, it seems Ben Roethlisberger is starting to show his age. He’s thrown at least one interception in five straight games, and he has completed just 54.7 percent of his passes over the last two weeks.

Is Father Time finally catching up to Big Ben?

“It is a sign of age when [you lead] the league in average pass attempts – and it’s not because you’re behind. I think that’s where the issue is,” former Steelers offensive tackle Max Starks said on The Zach Gelb Show. “You can’t throw it that many times. You have to be in the mid-to-low 30s with an efficient running attack to make that passing game go.”

“When you ask him to do that, I don’t think any quarterback over the age of 35 is going to be able to give you that game-in, game-out and [have it look] electric from Week 1 to 17,” Starks said. “So I don’t think it’s necessarily a knock on his age, but also at the same time, it’s just uncharacteristic to ask a guy to throw that many times a game. In any situation for any winning ball club, you’ve got to have balance, and they don’t have the balance right now.”

Roethlisberger, 38, is clearly on the back nine of his career. In recent years, he has spoken openly about retirement.

How much longer will he play in the NFL?

“Ben can play as long as he wants,” Starks said. “Tom Brady, Brett Favre, Peyton Manning, they’ve all shown you the recipe that they can play into [their 40s]. For him, I think he wants that other Super Bowl. He wants another Super Bowl. That’s what he’s chasing, and he feels like he has the team now. So I don’t think you give up on it now when the team is still ready-made to play and win a Super Bowl. It’s when you get into the rebuild that I think you have to think about when is your time up?”

Big Ben wants to win another Super Bowl, sure, but the clock is ticking.

“It seems every great quarterback has had to [change teams late in their career],” Starks said. “Show me one that’s played over 15 years that hasn’t had to switch teams at some point. Joe Montana did it; he’s an all-time great. Tom Brady’s done it. You look at Brett Favre – Brett Favre went a couple of places after he left [Green Bay]. The only ones I can think of are John Elway and Dan Marino, and this is not that era anymore. So if he wants to continue and the team decides to move in a different direction and rebuild, then that’s when I think you’ll see him move in a different direction. But for right now, I think he’s still good because he believes [this] Steelers squad is ready-made.”

Starks also addressed JuJu Smith-Schuster, who may want to rethink his pregame ritual of dancing on opposing teams’ logos. The Bills and Bengals, in particular, took umbrage with that in recent weeks, feeling it was disrespectful.

Are JuJu’s pregame theatrics a problem?

“I don’t think it’s a problem,” Starks said. “Everybody expresses their individuality differently. The fact that you’re seeking such attention is going to bring more eyes unnecessarily to you. But at the end of the day, you have to perform. And if that’s what it takes . . . then hey, I can’t sit here and eviscerate him like everybody else in the national media has because everybody has their thing. But I think at the same time, if you’re doing it solely for the purpose of attention-gathering, then you’re doing it for the wrong purposes – as opposed to getting yourself ready for a game – then you need to quit it.”