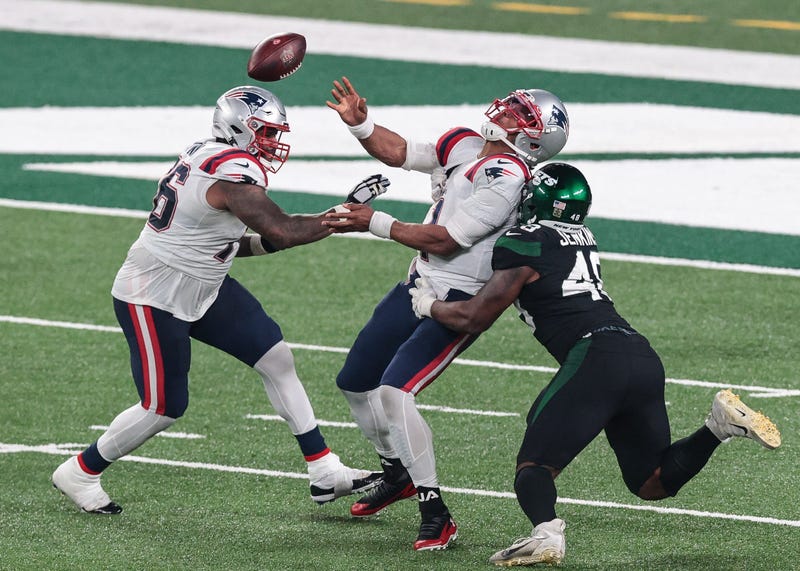 The New England Patriots snapped a four-game losing streak Monday night, beating the New York Jets 30-27 to improve to 3-5. The Patriots trailed 20-10 at halftime and 27-17 after the third quarter but outscored the Jets 13-0 in the fourth, as Cam Newton finished 27-of-35 for 274 yards and two rushing touchdowns.

The Patriots still trail the Miami Dolphins (5-3) and Buffalo Bills (7-2) by two and three-and-a-half games, respectively, in the AFC East.

What has been their biggest problem this year?

“Going in, I thought Cam Newton gave them an advantage . . . but watching him and [evaluating] their first eight games, he struggles to make simple throws,” former All Pro and current Raiders analyst Lincoln Kennedy said on Reiter Than You. “I think he puts way too much pressure on himself.”

Newton, the former No. 1 pick and NFL MVP, has completed 68.1 percent of his passes for 1,417 yards, two touchdowns and seven interceptions in seven games this season.

“Obviously he doesn’t have it,” Kennedy said. “He’s going to probably be relegated to a backup for the rest of his career. So with that in mind, the Patriots are . . . trying to get one of these [rookie] quarterbacks to make things better.”

Newton has done much of his damage with his legs this season, rushing for 314 yards and eight touchdowns. The Patriots have been competitive in most of their games, but they seemingly have a low ceiling relative to Bill Belichick’s lofty standards.

“I think the Patriots will be fine. They’ll be in the swing of things,” Kennedy said. “But they’re not going to necessarily win the division. I think that comes down to Buffalo. You might even make the argument for Miami. But the Patriots won’t be down for long. The question I have is how long is Belichick going to want to stay with it?”