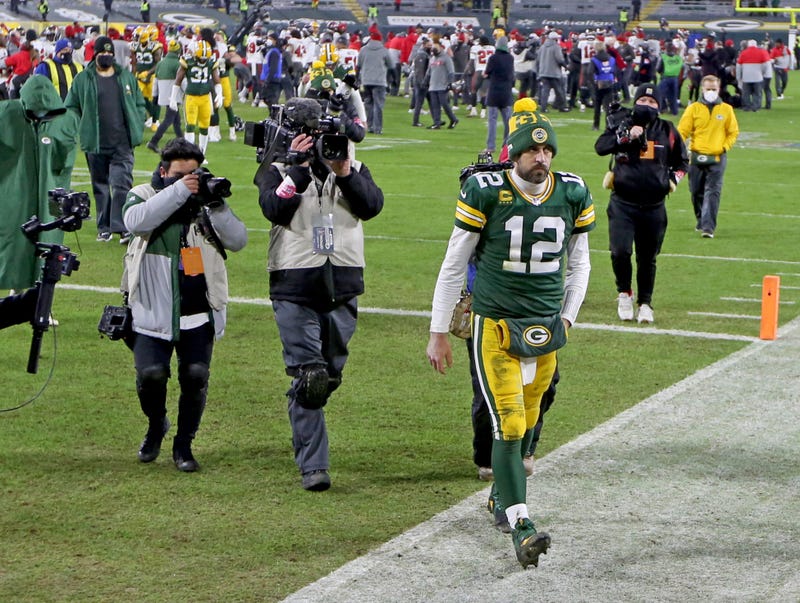 After losing a heartbreaker in the NFC Championship on Sunday, Packers quarterback Aaron Rodgers was clearly upset. In fact, he said he was “gutted” by the loss and that it would hurt for a long time.

Rodgers seemingly didn’t have this kind of reaction after losing in the NFC Championship in the 2019 season.

Why did this loss seem to hurt more than any other in his career?

“To be honest, I really don’t know what’s going on with Aaron Rodgers,” Milwaukee’s The Fan host Steve Fifer said on After Hours with Amy Lawrence. “Just in general all year, he’s been a different Aaron Rodgers. There’s only [one presser] I can remember . . . where maybe he was a little bit edgy. Outside of that, he’s been pretty upbeat, positive, and it kind of came out of nowhere. I guess we haven’t really seen this side of Aaron. The whole Pat McAfee interview thing that he does during the season probably opened him up to the fan base a little bit more and let everybody into Aaron’s world a little bit.”

Indeed, the vulnerable, almost sentimental side of Rodgers is one fans really hadn’t seen prior to this season.

“It almost feels like a quarterback, the way he’s been talking, like he’s making his last go-around the NFL,” Fifer said. “Making comments like, ‘I’m taking every moment it,’ and ‘I’m not sure what the future holds.’ If Philip Rivers would have said that in Indianapolis leading up to him deciding to retire, that makes sense. Aaron Rodgers has three years left on a pretty good size deal right now for the Packers. So all of it kind of didn’t make sense to me to begin with, and then the postgame presser comes about and people kind of, I think, overreacted a little bit.”

Rodgers didn’t exactly have a bad game in the NFC Championship, either. He finished 33-of-48 for 346 yards, three touchdowns and one interception. The offense, however, stalled twice in the red zone, including on the Packers’ final possession. Rodgers also seemed to question Matt LaFleur’s decision to kick a field goal with the Packers trailing 31-23 with just over two minutes to play.

Afterward, Rodgers cast doubt on his future with the organization, but Fifer thinks he’ll be back with the green and gold in 2021.

“I’m not convinced at all he’s just going to walk away and give it up and not play for the Packers anymore,” Fifer said. “But we got to remember what happened with Brett Favre and how that whole thing fell apart. He was there, he was part of it, he got booed at training camp that first summer, little kids holding up poster-board signs against Aaron – I just don’t think he’s going to leave Jordan Love holding the bag the same way that Brett kind of left him holding the bag. I don’t think it’s going to play out that way.”