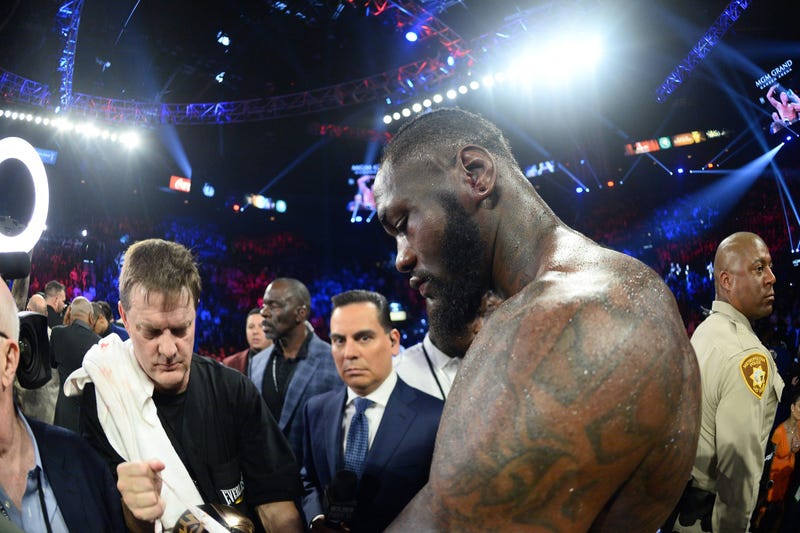 Tyson Fury dominated Deontay Wilder in Las Vegas on Saturday, scoring a pair of knockdowns before a seventh-round TKO.

“I wasn’t,” he said on The Zach Gelb Show. “I wasn’t surprised – reason being is because it’s the heavyweight division. Anything can happen. Either fighter in the heavyweight division always has that puncher’s chance. I was pleasantly . . . satisfied with the way Tyson Fury got it done. He got it done in a very tactical and intelligent form. It’s very rare what we saw the other night.”

Fury improved to 30-0-1, while Wilder fell to 42-1-1. It was the first loss of Wilder’s career, and he has struggled to make sense of it. In fact, he said the 40-pound costume he wore to the ring zapped him of his leg strength.

Porter, though, isn’t buying it.

“Honestly, I’m not,” he said. “I know from my own experience, that costume doesn’t go on until you’re about to leave your locker room. That costume is not something you’ve worn throughout the day. It’s not even something that you’ve worn for an hour or two in the locker room. That’s something that Deontay put on, at most, 20 minutes before he got ready to walk to the ring. So you’re talking about him having that on for a very short amount of time.”

Porter did notice that Wilder was pacing back and forth in his locker room before the fight.

“I think he had a lot going on from a mental standpoint that kind of wore him out,” Porter said. “I think before he got to the ring, he may have been feeling some things. Those things may have also weighed on his mind and also his body prior to that first bell ringing.”

Still, all credit should go to Fury.

“He didn’t pressure Deontay Wilder the way that someone like myself would pressure another fighter,” Porter said. “I pressured guys with a lot of movement and a lot of punches. Tyson Fury didn’t do that. He was able to step forward and kind of trail Deontay Wilder. Another thing he did was pump his jab hand. Pumping his jab hand is almost like a fake, which didn’t allow Deontay Wilder to relax. He always had to think, ‘What punch is coming? And when is it coming?’

“There’s a lot more ways to wear a guy down,” Porter continued. “You wear a guy down mentally just as much as you can physically. I think the way Tyson Fury went at Deontay Wilder and the way he pumped that jab – without even throwing it out but just those fakes – it really wore down Deontay Wilder in a matter of rounds. And then of course we saw when he did connect, Tyson Fury connected with those right hands and straight lefts. Those also took a toll very quickly on Deontay Wilder as well.”