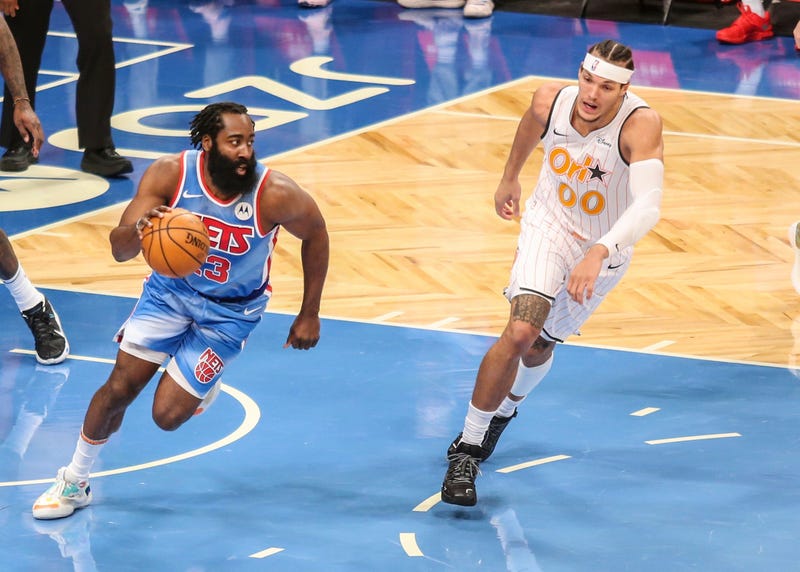 Apologies to the NFL Divisional Round matchups, but it was James Harden who stole the show this weekend. Before we delve into Harden’s historically great performance Saturday, let’s acknowledge that he threw in the towel on Houston Rockets this season. The kind of shape he came into this season is unbecoming of an MVP-caliber player. In January in Houston, he looked like a shell of himself. A change of scenery can do a lot of good for both parties, and that is exactly what we see unfolding. What Harden did on Saturday was off-the-charts great in his Nets debut. Because of the off-the-court drama recently, we forget that this is one of the five greatest offensive players in the history of our game AND a much better defender than people give Harden credit for.

In Harden’s first game as a Net, he went for 32 points, 14 Assists, 12 Boards and 4 Steals. Only Magic and LeBron have had a game like that in the last 40 years. Even if you exclude steals, Harden is the only Nets player in franchise history to go for at least 32 points, 14 Assists and 12 boards in a win. It bears repeating, this was the guy’s FIRST game with his new squad. When it comes to the Rockets’ franchise, even if you do not include steals, only Harden has put up 32 points, 14 Assists and 12 boards in a game. He did it only twice prior to Saturday in his 13-year NBA career. Harden was a man amongst boys on Saturday. The 6’5 guard had more rebounds than both 6’10 Kevin Durant & 6’11 DeAndre Jordan COMBINED. He also happened to have the most rebounds in the entire game. Harden, as previously mentioned, had 14 Assists; the rest of the Nets had 10 Assists COMBINED. Harden had six more assists than the Orlando Magic starting backcourt. Harden got to the free-throw line and converted, something he does better than anybody else in the NBA. Thirteen made free throws for the Beard, as many as the entire Magic team combined. Again, what a difference a change of scenery makes. He played like an MVP on Saturday. With the Rockets in January, he looked bound to not even sniff an All-Star Team.                                    PPG  APG  RPG  SPGSaturday                       32     14      12      4Rockets in January       17     10       5       1 Many soured on Harden this season, and in fairness, Harden did that to himself, but we have to give him his due. This is an All-Time great! Harden has 18,397 points since 2012. Keep in mind that he became a full-time starter in the NBA in the 2012-13 season. The amount of points he has put up since 2012 is nearly 3,000 points ahead of LeBron James, who is second in points over that same period. In fact, only LeBron, Damian Lillard and Russell Westbrook are even within 4,000 points of Harden. His point total over the last eight years and nine games is more points than what Tracy McGrady, Chris Mullin and Kevin McHale had for their entire careers. All, as we know, are Hall of Famers. Speaking of Hall of Famers, in that eight-year-plus-nine-games duration for Harden, he has more points than his head coach, Steve Nash, had for his career. Nash played into his 40s.

Harden is so much more than a scorer. As a facilitator, he is truly one of the best in game. Only Russell Westbrook and Chris Paul have more assists since 2012. Harden’s 4,810 Assists since 2012 are more career assists than what Hall of Fame point guard Gail Goodrich had for his entire career. As a rebounder, Harden has recorded 3,748 rebounds over the last eight years. Aside from Russell Westbrook, NO OTHER GUARD is even within 78% of that total. Harden has been knocked for his defense, but keep this in mind: do you know who is FIRST in steals since 2012? JAMES HARDEN. For all the jokes and ridiculing of Harden when it comes to his conditioning and defense, nobody in the NBA has more steals in the last eight years. Is he Gary Payton aka “The Glove” on defense? Of course not. However, you are an above average defender when you are first in ANY defensive category over that long of a time frame. The greatest player of all-time in most people’s mind is Michael Jordan. I would happen to agree. The second greatest player of all-time in most people’s opinion would be LeBron James. I would certainly second that, no pun intended. LeBron’s prime is unlike any prime we have ever seen. If you are objective, you can’t dispute that, at the very least, his prime lasted until 2020. LeBron, since the 2012-13 season, has won an MVP and has finished second in MVP voting on three different occasions. You know who has also done that in that same time period? James Harden. That is ELITE company to be in!

We forget how much winning Harden has actually done; his numbers have translated into team success. He may not have won an NBA title yet, but that doesn’t diminish the level of success he brings to any given franchise he is a part of. In Harden’s 8 years and 9 games with the Rockets, they won a total of seven playoff series. The FIFTEEN YEARS PRIOR TO THAT, the Rockets won a total of ONE PLAYOFF SERIES.

I wrote in a previous article why the Rockets shouldn’t trade Harden. In the last 30 years, there are three occasions in which a player has averaged more than 34 PPG in the regular season. Harden is responsible for two of them. The only other player to accomplish this in the last three decades was the late GREAT Kobe Bryant. Harden averaged over 36 PPG in the 2018-19 season. Only two other players in the history of the NBA have done better. Those two names are synonymous with NBA icons. They go by Michael Jordan and Wilt Chamberlain. Anytime you up an ENITRE season of numbers that puts you in a category with the likes of Michael and Wilt, ANY franchise is lucky to have you. The reason why the Nets are extremely lucky is because the Harden that found himself in the category of Michael and Wilt was the same Harden that showed up on Saturday!