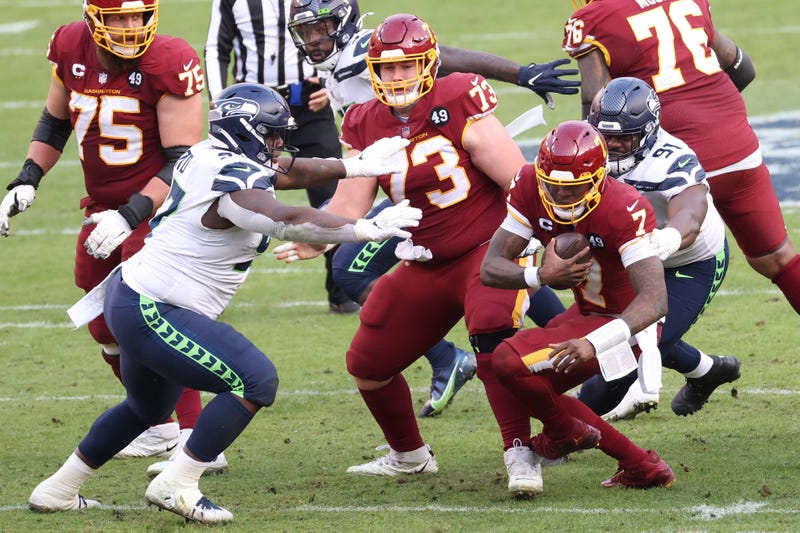 The Washington Football Team released quarterback Dwayne Haskins on Monday, one day after benching him in a 20-13 loss to the Carolina Panthers.

Super Bowl champion Joe Theismann, however, does not believe this is the last we’ve seen of the Ohio State product.

Haskins played in 15 games over two seasons with Washington. He threw 12 touchdown passes and 14 interceptions.

“You got to remember he played with a track team in college at Ohio State,” Theismann said. “We have Terry McLaurin, who’s a fantastic football player . . . and he was the fourth guy on that team. So he was surrounded by a whole lot of talent out there. He’s got to commit himself to try and be a better quarterback and listen to people. If people want to help you, by golly, let them help you. . . . You want to see the effort put forth to try and be better. I believe this has been a stark lesson to him. He went from the top of the mountain to basically out of the game, and if you base it off his performance, where’s he going to go?”

In his final appearance for Washington, Haskins finished 14-of-28 for 154 yards, two interceptions, one fumble, and two sacks.

“I think he has to commit himself to want to be a football player,” Theismann said. “If you want to be a quarterback, there’s a lot of sacrifices that have to be made and a lot of work that needs to be put in. From what I saw on the field, he didn’t improve from a year ago. . . . He struggled holding on to the football, he struggled with interceptions, he missed people – mechanically, he needs to be rebuilt. He throws the ball – whether you’re five feet away or 50 yards away – he throws a fast ball. He’s got to learn to put a little more touch on the ball and work on the mechanics of the position. And I hope he does. I really do. I’m rooting for him to be able to find a place. He has a future in this game if he wants to commit himself to be a quarterback in the National Football League. But that’s all up to Dwayne.”

Haskins was stripped of his captaincy last week after violating COVID-19 protocols for the second time. He was photographed without a mask at an event with strippers.

“You’re not only putting yourself at risk; these guys are in a playoff hunt,” Theismann said. “And here you are in the position you’re in, and you wind up in a situation where you could have been suspended. I thought Ron cut him a break by letting him play. I did not expect to see him on the field. So it’s disappointing. Very much so.”