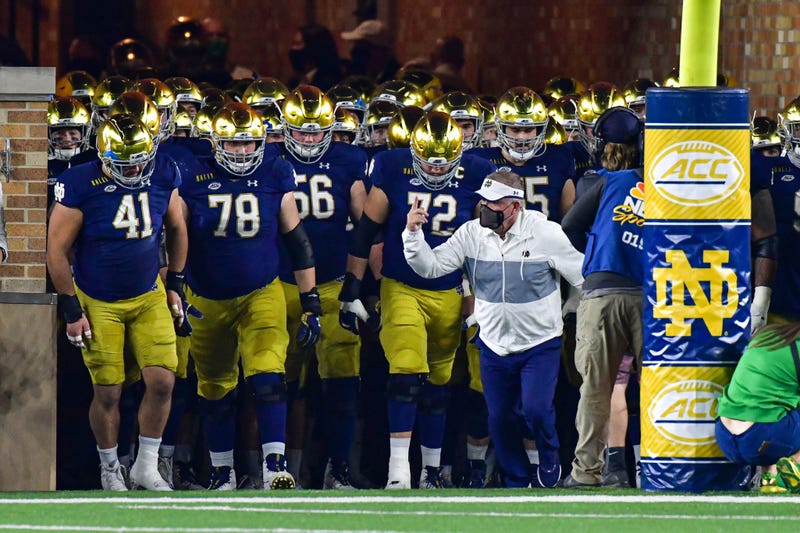 The Fighting Irish beat Clemson, 47-40, in double overtime in South Bend on Saturday, ending the Tigers’ 39-game regular-season winning streak in the process.

With the win, Notre Dame (7-0) improved from No. 4 to No. 2 in the rankings and has a legitimate shot at the College Football Playoff. More importantly, though, they changed the perception of their program.

“The narrative has always been the same: you sit out here independently, you’re making a ton of money from NBC – you’re not good enough to compete with the big boys, especially in important games,’” Tiki Barber said on Tiki & Tierney. “This was an important game, and Brian Kelly had them ready. They came away with a victory that I think changes my perception of the program [and] certainly of Brian Kelly for getting his guys ready.”

Notre Dame quarterback Ian Book finished 22-of-39 for 310 yards and a touchdown, while running back Kyren Williams carried 23 times for 140 yards and three scores. The Irish also forced three turnovers, including a 23-yard fumble return for a touchdown by Jeremiah Owusu-Koramoah.

The Irish held up in the trenches, limiting Clemson to 33 carries for 34 yards. That’s something Notre Dame wasn’t able to do in the 2012 national championship against Alabama or the 2018 playoff semifinals against Clemson. The Irish lost those two games by a combined 72-17.

“The narrative around Notre Dame,” Barber said, “was, ’Yes, they’re this independent that sits out in the Midwest, they play whoever they want, their rivalry games aren’t rivalry games anymore. Nobody thinks that BC [Boston College] has a shot. Nobody thinks that USC, who has been bad in the Pac-12 over the last couple of years, that they have a shot. These big-time rivalry games that we glorify from a bygone era, they’re not relevant anymore.’ . . . This year, [they are], though, because they’re in the ACC, so every game matters as they try to push toward the ACC championship.”

They play three of their last four games on the road, beginning with Boston College (5-3) this Saturday. Kickoff is at 3:30 p.m. ET.