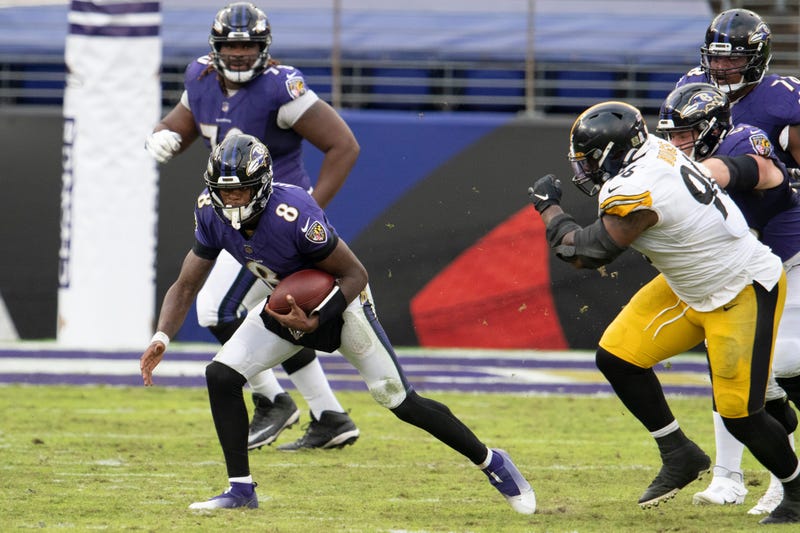 Ravens quarterback Lamar Jackson was the most unstoppable force in the NFL last season. This season, however, his statistics are down across the board, and he has struggled mightily against elite competition.

In Baltimore’s two losses this season – at home against Kansas City and Pittsburgh – Jackson was a combined 28-of-56 (50 percent) for 305 yards, three touchdowns, two interceptions, five fumbles (three lost), and eight sacks.

“That is alarming,” Brandon Tierney said on Tiki & Tierney. “Across the board, Lamar Jackson is not nearly the same player – and I want to know why.”

That’s quite a difference.

“People are starting to figure it out,” Tiki Barber said. “It’s as simple as that. What adjustment can you make if you have a running quarterback? It’s not hard. It’s easy.”

While Jackson has struggled, another young dual-threat quarterback, Kyler Murray, has been a revelation. Murray, 23, has thrown for 1,800+ yards, rushed for 400+ yards, and scored 20 touchdowns (13 pass, seven rush) in seven games.

“I said [before the season], ‘Kyler Murray is going to be better than Lamar Jackson, there’s no doubt in my mind,’” Tierney said. “This was my fear with Lamar Jackson. Where’s the refinement? Where’s the evolution? I need to see a little bit more. You cannot thrust him in the upper-tier of quarterbacks. You can’t do it – even with the MVP award, I’m sorry.”

Jackson has thrown for fewer than 200 yards in four of seven games this season – and fewer than 210 yards in two others. He was sacked 23 times last year; he’s on pace for 43 this year.

“You can’t expect him to be an upper-tier thrower of the football because he’s not really comfortable throwing to the sidelines,” Barber said. “He’s very good throwing over the middle, and he’s very good throwing corner routes when you’re in the red zone. But when you have to throw those deep comebacks or those out routes, that’s not his forte. His mechanics are a little bit off, and as a result, those are his worst passes.

“But that’s what defenses are going to keep giving him,” Barber continued. “They’re going to take away those inside routes, as we saw on the first [drive] of the game [against the Steelers], the pick-six. So he’s got to learn how to be diverse in his repertoire. Otherwise you figure him out. You have a spy, a rover – whatever you want to call it – that prevents him from having these huge running games and blowing a game open that way. If you can do that, you can stop this Ravens team.”

Jackson and the Ravens will try to right the ship this Sunday in Indianapolis. Kickoff against the Colts is slated for 1 p.m. ET.