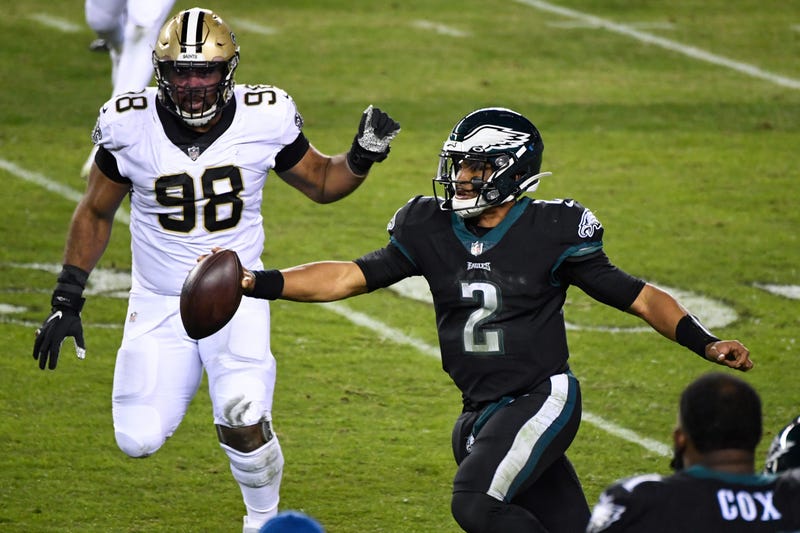 Rookie quarterback Jalen Hurts won his first NFL start Sunday, leading the Philadelphia Eagles to a 24-21 win over the New Orleans Saints (10-3). Hurts threw for 167 yards and ran for 106, as the Eagles (4-8-1) snapped a four-game losing streak – and ended the Saints’ nine-game winning streak.

He was, in a word, incredible.

Nevertheless, Eagles head coach Doug Pederson was muted in his praise of Hurts, saying the win was “not about one guy.”

Tiki Barber and Brandon Tierney both thought this was a bad look for Pederson.

“Give the kid some credit,” Barber said on Tiki & Tierney. “Your team was on a gross free fall, and a lot of it was because of . . . Carson Wentz, who you heaped just tons of praises on and who you have been defending against all reason for the last six weeks of the season despite all of his turnovers and inconsistency and inability to let go of the football.”

Wentz leads the NFL with 50 sacks. Hurts took zero on Sunday. He also made good decisions with the football, a late fumble the lone blemish on an otherwise stellar debut.

“Give that kid some credit and have a little bit of enthusiasm for a guy who just broke your losing streak [and] is probably going to save your job,” Barber said. “The inconsistency [with his praise] frustrated me. . . . It’s almost like he’s not reading the room that he’s sitting in and that he’s supposed to have control over. . . . But give the kid some credit. Jalen Hurts was put in a rough situation, had he played pretty damn well.”

“I can never prove this, [but] I wouldn’t be surprised if deep down, Doug Pederson was hoping Jalen Hurts played horribly," Tierney said. "Because now it’s very easy to sit here and say, well, with Frank Reich, you had one guy for the most part, and now without him, you have a shell of whatever he was, which was basically the MVP – and over the course of three-and-a-half months this season, you have not been able to rectify whatever the heck plagues Carson Wentz. Yet, in one week, a kid with no reps under his belt, no experience, comes in – basically without your tutelage and the same junk around him – and he plays pretty well. So this is on you, Doug.”

Hurts is the only quarterback since 1950 to throw for 100+ yards, rush for 100+ yards, and throw a touchdown pass in his first career start. He will start for the Eagles this Sunday on the road against Arizona (7-6). Kickoff is at 4:05 p.m. ET.