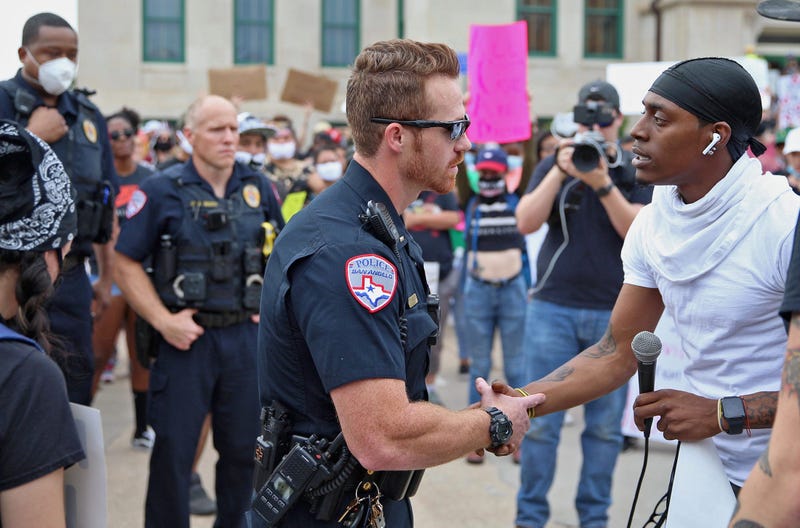 As U.S. citizens continue to mourn the death of George Floyd, and as protests in his honor rage throughout the country and around the world, Tiki Barber and Brandon Tierney discussed their wide range of emotions during a tense, uneasy time in America.

“This world is not a perfect place. It never has been and likely never will be,” Barber began on Tiki & Tierney. “But it doesn’t mean it has to be a bad place filled with evil people who do privileged things because of the uniform that they wear. But as citizens of this country, we also sign up for a social contract and we need to do things the right way.”

Floyd, an African American, died in Minneapolis on May 25 after a white police officer, Derek Chauvin, knelt on Floyd’s neck for over eight minutes. Chauvin has been charged with murder and manslaughter.

While many protestors have remained peaceful while demonstrating, others have not. In some ways, divisions have only grown deeper.

Many white athletes, including Bengals quarterback Joe Burrow, have spoken out against Floyd’s death. “The black community needs our help,” Burrow said.

“We have heard a long time, and we’ve heard this now for years, African-American athletes and other people of color and minorities saying, ‘We need the white voice to step up and to be heard, to say what’s right, maybe more specifically to say what’s wrong and what’s unacceptable and what’s acceptable,’” Tierney said. “I don’t know how I can be any more clear when I tell you that you have that voice. That voice is being used at a volume and in a direction that I don’t think it’s ever been used before. And I hope that people of color feel that. . . . The voice that you’ve wanted to hear, it’s rising, and hopefully you take a little solace in that. We’re not going to eradicate these issues today. But that voice that you need, that you want, it’s there for you.”

Barber appreciated that, especially given that he and Tierney come from different walks of life. Tierney is white; Barber is black. Tierney grew up in Brooklyn; Barber grew up in Roanoke, Virginia.

But they’ve been co-hosts—and friends—for the last seven years, and their on-air chemistry is undeniable.