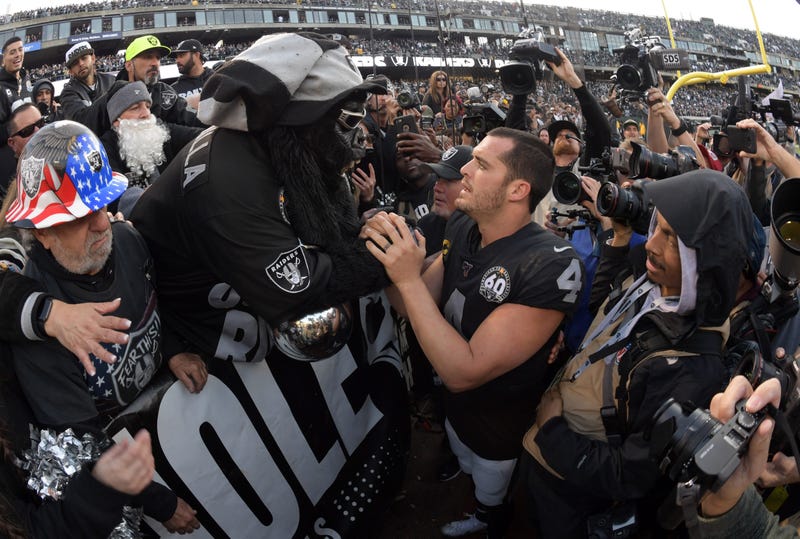 After taking Henry Ruggs, Lynn Bowden Jr. and Bryan Edwards with three of their first four picks in the NFL Draft, the Las Vegas Raiders clearly wanted to get better on offense – and for good reason. The Raiders ranked 24th in the league in scoring offense (19.6 points per game) in 2019.

“When you look at what happened last year, [Jon] Gruden was basically doing it with smoke and mirrors and finally the last mirror that he had broke,” Hall of Fame wide receiver Tim Brown said on Tiki & Tierney. “When you don’t have explosiveness on the offensive side of the ball, especially in today’s football, Gruden is really good at having these long touchdown drives – seven, eight, nine, ten plays. But that doesn’t help you when your defense is giving up touchdowns in two plays. So I think he’s in a position now where he feels as if he has the players that can make things happen. Now these guys got to go out and play.”

That includes Derek Carr, who has thrown for 4,000+ yards in back-to-back seasons but has averaged just 20.7 touchdown passes over the last three years. He has also never started a playoff game, and the Raiders are 17-31 since 2017.

“I think this is a really, really big yer for Derek Carr,” Brown said. “Obviously they brought in [Marcus] Mariota to be the backup quarterback, and I think he’s going to play in special situations – to run the ball, to do whatever. Gruden is going to definitely get him on the field. This is a Heisman Trophy winner, a guy who has payed at a high level for a long time and has had some good years in the league and is the perfect guy for Gruden to resurrect. Now Derek Carr has his speed guy [Ruggs]. He has everybody on the offensive side of the ball that he could ask for. There are not going to be any excuses for him.”

In the past, Carr had excuses. Amari Cooper was inconsistent. The offensive line was’t good. He didn’t have a true No. 1 wide receiver.

“I don’t think he has an excuse this year,” Brown said. “I think he has to really go out and play at a high level. . . . They’ve set Derek up to succeed. If he plays well, I think he’ll be the quarterback there for the Raiders for a long, long time. If not, I think there could be some changes after the season.”

While the Vegas Golden Knights reached the Stanley Cup in their inaugural season, Raiders fans may want to temper expectations for 2019.

“The Golden Knights certainly set a high bar,” Brown said. “I don’t think anybody will sit here and tell you today that the Raiders are going to make it to the championship, but I think this is going to be a very competitive football team. When you have the world champions in your division, you better be competitive. Otherwise you’re going to get embarrassed like they have been the last couple years by the Chiefs.”