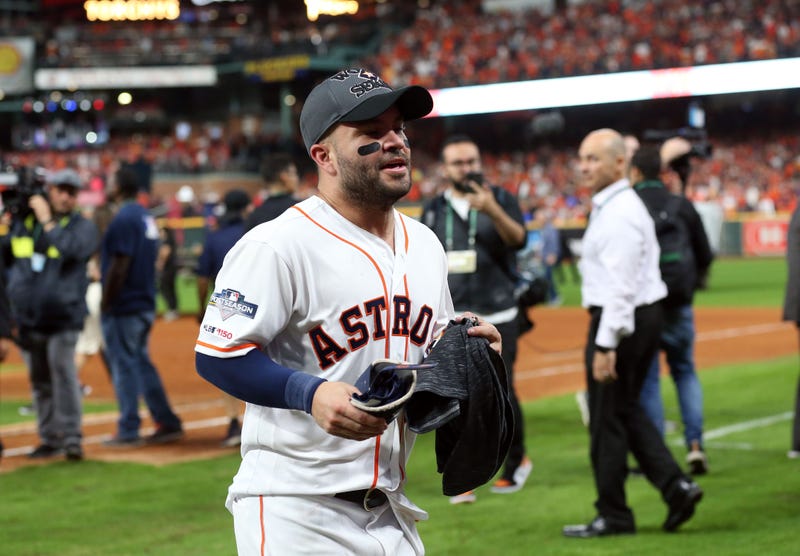 Jose Altuve, to many, offered a weak excuse in claiming that he did not wear a buzzer in the midst of the Houston Astros’ sign-stealing scandal, saying that his wife does not like it when he removes his jersey on the field. Similarly, A.J. Hinch, when asked, did not categorically deny the notion that Altuve wore a buzzer. Instead, Hinch referenced MLB’s investigation into the matter – and subsequent lack of findings.

Still, there is speculation that Altuve may have worn a buzzer under his uniform as part of the Astros' sign-stealing efforts.

“Well, I think we live in a day and age where you’re not really surprised by anything you hear it seems like, sadly, anymore,” Hall of Fame pitcher Tom Glavine said on The Zach Gelb Show. “You’re not totally caught off guard when you’re led to believe that one thing was true and something else ended up being the truth, and this is no different. Sadly, that’s the world we live in. I’m not using that as an excuse. I accept where Major League Baseball is right now and where  the investigation is and what they said.

“Having said that, I wouldn’t be the least bit surprised if something more comes out,” Glavine continued. “That’s the nature of this whole thing. Everybody is trying to get their arms around exactly what did happen. I’m sure there is some level of, ‘Hey, we got caught and this is what we did,’ and maybe there’s some level of holding on to the full truth and the full truth hasn’t been disclosed. Like I said, it is where it is right now.”

Where it is right now, however, might not be where it ends up.

“Would I be completely floored if I heard somewhere down the road that the buzzer thing was true and it went to that extent? No, I probably wouldn’t be,” Glavine said. “I’d probably be a little bit shocked a team would actually go to those lengths to do something like that. It’s one thing to get a feed off of a monitor and bang a trash can. It’s another thing to go to another level of having buzzers or whatever else may be the case. I think it would be more shock that they went to that level than it would be shock to find out that they did.

Glavine was asked if he believes the Astros’ 2017 World Series title is tainted.

“It’s hard to say,” Glavine said. “I played a big chunk of my career in an era where guys were doing steroids and it was considered cheating. People will tell you, ‘Well, it’s not really cheating. They still had to hit the ball.’ This is the same thing. You can know what pitch is coming theoretically. You still got to hit the pitch. You still got to have a good at-bat. You still got to do all those things. Does it give you an unfair advantage? Of course it does. Is it completely tainted? Probably not. Is it somewhat tainted? Yeah, but I think that’s something people are going to make up on their own minds. I think you’re going to get varying degrees of what people think. I think it definitely taints it to some extent, but not to the point where . . . they should be stripped of their championship. I don’t think it’s to that degree.”