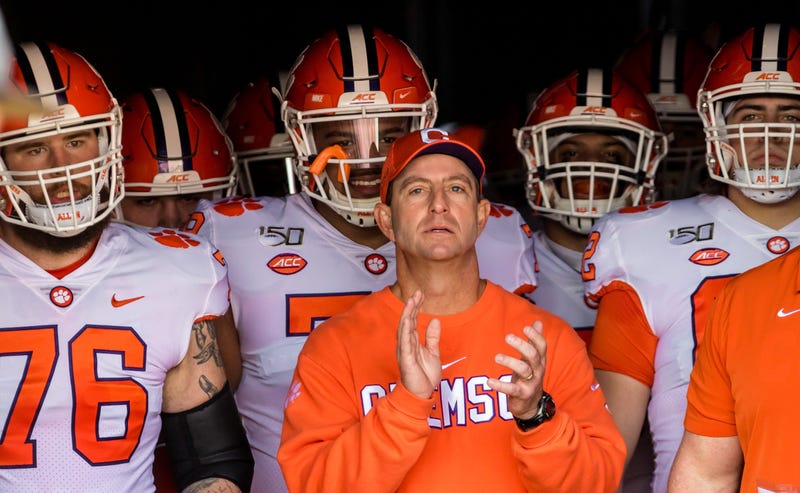 With the Houston Texans saying goodbye to Bill O’Brien, one must wonder if they might say hello to Dabo Swinney. After all, Swinney coached Deshaun Watson at Clemson, and they had a lot of success together.

Perhaps Dabo would join Deshaun in the NFL?

“That would be interesting, only because those two have had a lot of success together when he was at Clemson,” Warren Moon said on The Zach Gelb Show. “They went to two national championships games and won one. Dabo Swinney said Deshaun Watson is like the Michael Jordan of football before he got drafted. That’s how highly he thinks of Deshaun. I think if Dabo was able to win another national championship this year – which they’re on pace to maybe do that – that would be three national championships for him. Maybe he does want to go to the next level and try to coach pro football.”

Swinney, of course, deflected when asked about this.

"I’m not sure if he has those type of aspirations,” Moon said. “He has it really going well there at Clemson right now. He is in full control of what’s going on there. I’m sure he would want full control wherever he goes in the National Football League if he was to leave college. But that would be a very interesting pairing.”

Zach Gelb does not believe Dabo would be a good fit for Houston – or any NFL team. He sees Dabo as more of a rah-rah college coach.

“Pete Carroll, they said that about him, too,” Moon pointed out. “When he came out of USC: he’s a rah-rah guy; he’s more of a college coach. But he goes on to go to two Super Bowls and he’s been in the playoffs every year. So if you can coach and you know how to communicate with young men – which those two guys know how to do – you have a chance to be successful, especially if you get a good quarterback. Pete Carroll has had Russell Wilson; you see what that’s done for him. Dabo Swinney with Deshaun Waston, you never know what might happen when you got a great quarterback and a coach that knows how to communicate. I’m sure Dabo will look at it very seriously, especially if he wins another championship this year.”

As for O’Brien, Moon wasn’t surprised the Texans moved on from him.

“I was not shocked, but a little bit surprised it happened that early in the season,” he said. “But this is a team that went a couple of rounds into the playoffs last year and now all of a sudden they can’t win a football game. When you hear J.J. Watt come out and say that this is really a bad situation and something needs to change, that tells you a lot right there – and the next thing you know, the next day, the coach is out. I think if you’ve lost your players and the players aren’t believing in what your philosophy is and what you’re coaching, usually there’s going to be some type of change.”