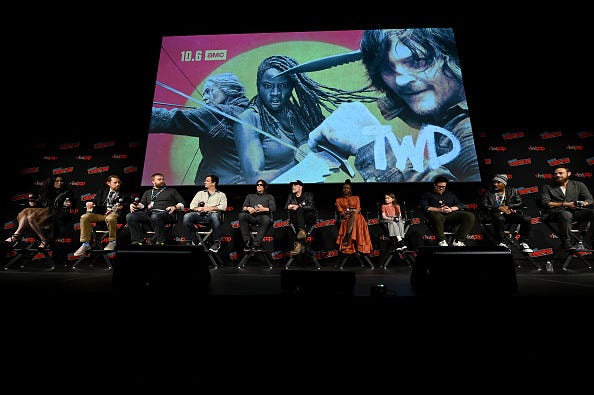 Fans watching Sunday night’s midseason finale of the AMC zombie-horror series got a treat when the network revealed the first trailer for the recently announced spinoff.

The trailer for the third scripted “Walking Dead” series, titled “The Walking Dead: World Beyond,” offered a peek at the first generation of the apocalypse.

The teaser also revealed a surprising connection between “The Walking Dead” and the spin-off “Fear the Walking Dead,” as a helicopter (presumably the same one that took Rick Grimes) featuring a three-circle logo made an appearance.

“We’ve seen that three-circle symbol... those three circles, and I’m saying it here, represent three different civilizations that are bound and entwined in some ways and in some ways very, very different,” "The Walking Dead" chief content officer Scott Gimple said at New York Comic-Con.

“World Beyond” is set in one of those three communities.

Emmy-award winner Julia Ormond made her debut in the trailer as Elizabeth, a “charismatic leader” of a large force.

“We are the last hope,” she's heard saying as her soldiers don’t hesitate to shoot.

According to AMC, the series will “feature two young female protagonists and focus on the first generation to come of age in the apocalypse as we know it.”

The network added that “some will become heroes. Some will become villains. In the end, all of them will be changed forever. Grown-up and cemented in their identities, both good and bad.”

The third installment hails from Gimple and showrunner Matt Negrete.

It will join the TWD universe in the spring of 2020.