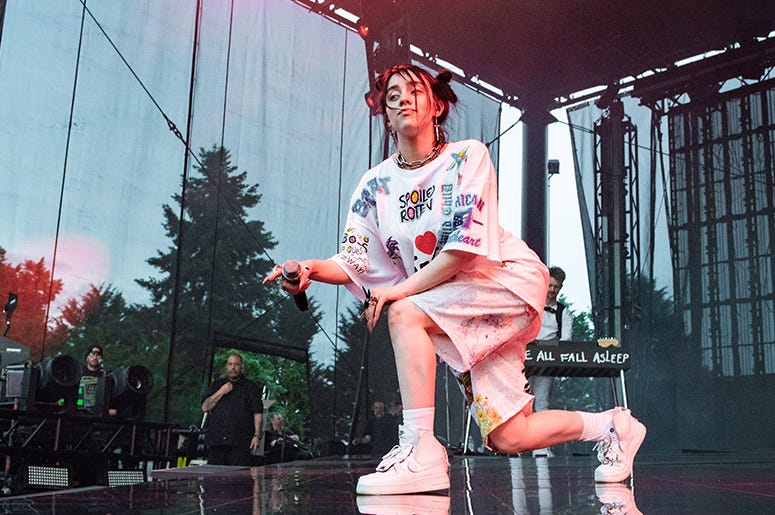 Billie Eilish posted new behind the scenes images from her all-mall access video shoot for “Therefore I Am.”

“SWIPE FOR TIA BEHIND THE SCENES LOLLLLLL😁😁,” the alt-pop superstar captioned alongside an Instagram album capturing candid moments during the surreal video shoot. Many fans wondered how Billie was afforded total access to the Glendale Galleria shopping center. Turns out she just set an early alarm. “empty mall at 4 am,” the artist explained in the caption.

The first carousel image depicts a masked Eilish posing near mannequins with family dog Pepper on a leash. Billie went full agro on the lifeless sub humans and flipped one the bird in another picture. Video footage included a new perspective shot her dance moves, a drive-by F-U via golf cart and Eilish’s attempt at a TikTok dance challenge. “u see us doing the try not to dance challenge and faaaaaaailing," the caption describes her attempts to twerk without laughing.

Hopefully Billie has more candid moments prepared for her November 22 performance at the American Music Awards. She’s expected to perform the new single live, for the first time. Hopefully the awards show will let Billie get creative with her stage craft, while adhering to social distancing guidelines. The singer is nominated for Favorite Alternative Rock Artist and Favorite Social Artist. The 2020 American Music Awards Air live on Sunday night at 8PM ET/PT on ABC.

It’s been a banner year for Eilish who recently celebrated 1 billion views on Youtube for the global hit “bad guy.” The song, which reached number 1 on Billboard’s Hot 100 chart, has now entered the exclusive billions club.